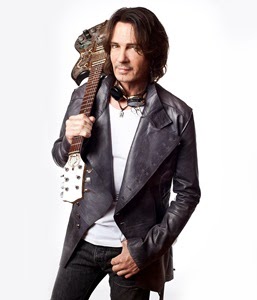 On a frigid and blustery evening Rick Springfield rolled into the Berkshires to entertain us at the beautiful Colonial Theater. Things were about to warm up very shortly though.

Every time I step into that venue I feel immense appreciation for its restoration. It is one of the best decisions Pittsfield has ever made. Bringing in acts like Springfield is one of the many joys of having the theater available to the local audience. People do come from all over for the shows however, last night there were folks from Boston, Vermont, Rhode Island and Connecticut.

As I was walking into the theater I was seeing a lot women filing in. Could this 80s heartthrob still have the following of females he did back then? Probably not but those girls that followed him back then are now in mid-life and there was a lot of them there screaming and hooting over this legendary pop icon. At this point I was asking myself if I should be attending. That question was answered after Springfield’s first number and consequently throughout his entire performance. I have a newfound respect for his abilities, particularly with the guitar playing.

This was all Rick and his guitars and an Apple laptop, or as he put it, his band in a box. This was not an all-acoustic show as he did pull out the electric six-string on several occasions. As we found out soon enough the addition of the backing tracks accentuated his performance greatly. This was not a bunch of sliced up tracks from previous albums or sampling mind you, it was his recordings especially made for the show. He made sure we were aware of that factor. It did make a difference and filled in some gaps that a full complement of players would have provided. It was an impressive display of talent anyway you look at it and the man can sing just as well as he did when his popularity soared in the early 80s. It is hard to believe he is 66 years old and looks so fit and can still sing so strongly. These things don’t happen by chance; certainly a lot of hard work is involved to maintain a healthy appearance and strong vocals at his age. It worked for him last night.

As the saying goes, every song has a story behind it somehow and Springfield let us in on how his songs were developed. This part of the show made every song an adventure. After shedding light upon his songs it made you feel you knew him personally and hence there was more emotional attachment involved while listening. The most touching part of the evening was when he told us about his father dying and how it took him three years to find the words to write a song about him. He explained how when his father was dying that he would sit in a blue recliner and watch cricket all day long. Springfield nearly was in tears as he explained the essence of the song “My Father’s Chair.” It was a beautiful thing to watch such heartfelt artistry on display. Of course he would end the night with his mega hit “Jessie’s Girl,” much to the delight of the women (who suddenly became screaming tweens again) in attendance.

There is a lot of audience interaction with his stripped down version of his recorded works and he even has a Q & A session with the audience when he is done playing. The questions where all sent in prior to the show via email and then answered when he finished his last number and took a quick break before coming back out on stage.

Rick Springfield is an accomplished guitar player, vocalist, and story teller and I would highly recommend catching one of his shows if you can.