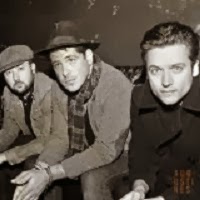 First they were Pela. Then they became We Are Augustines. Now, they are just Augustines. There is plenty to talk about in regards to how this all happened and how this band almost stopped entirely. I recommend you read up on this if you enjoy this band. Their story is a whole article in itself, but it will make you appreciate them all the more. That said, the important thing is that the current lineup is still making music, the latest being the self-titled release under their latest name, Augustines.
Augustines picks up where Rise Ye Sunken Ships left off. This makes sense as the same lineup was used on both albums despite the name change. It’s pretty safe to say that if you like what you heard previously, you should like their latest stuff as well. It still has that modern Springsteen feel to it, especially with Billy McCarthy’s scratchy vocals.  Augustines has a bigger sound then previous work. It is more ambitious, but it is still full of the passionate blue-collar rock sound that makes this band so good.
A track like “Cruel City” falls right in the bands wheelhouse. It is just what you expect given what was good about their previous album. On the other hand, “Walkabout” gives you an example of the bands ambition with this latest album. It’s an adventurous track that displays the bands desire to branch out and aim for stages bigger than they’ve graced to this point. Still, I found that “Kid You’re On Your Own” was more reminiscent of Pela. As I still prefer the Pela album to the two “Augustine” releases (though I am still  as much a fan of them), it was a pleasant surprise.
Augustines makes it pretty clear that Augustines have plans for larger things ahead. Compared to their previous releases it shows hints of the arena-sized sounds of bands like Coldplay. Having seen this band before, their songs do take on a whole different dimension when performed live and they can certainly accommodate an arena. While I like the growth and improvements from Rise Ye Sunken Ships, I also find that it may be trying to be a little too much too soon. I do think the result will be favorable for Augustines in expanding their reach, but I think that splitting the difference would likely have made for a bit better of an album at this juncture. Regardless, Augustines have made another rock album that should earn them the attention they deserve.
4/5 Stars
Key Tracks: Cruel City, Walkabout, Kid You’re On Your Own
Kevin Kozel
February 21, 2014
Review Provided By Write A Music Review
Posted by Keith "MuzikMan" Hannaleck at 2/23/2014