Concert Review: The Blues Show at the Colonial Theater


The Blues Show at the Colonial Theater-Pittsfield, MA
February 15, 2014 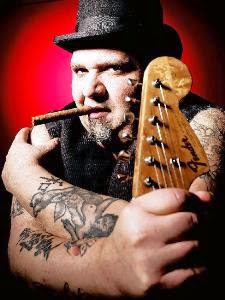 Saturday, February 15th, the Colonial Theatre in Pittsfield MA had its second edition of “The Blues Show.” In the midst of the snowstorm, there were still many in attendance and the bands were on fire. This year, Pittsfield was treated to a diverse group of blues veterans - The George Boone Blues Band, Popa Chubby, and Roomful of Blues.
The George Boone Blues Band brought a very traditional, soulful style of blues to the show. It was simple, yet this simplicity had the power to transport listeners to a smoky blues bar somewhere in the Deep South. What Mr. Boone’s voice lacked in musicality, he made up for with pure soul. Listeners of modern day, highly processed Top 40 radio might cringe when hearing his voice, but it’s that pure, untouched voice that makes his singing so special. While the set was as solid as could be, their original track “Meaning of the Blues” and cover of The Temptations “My Girl” were the standout performances.
Popa Chubby then came to the stage, opening up the set with a fiery rendition of Jimi Hendrix’s “Hey Joe.” According to him, there was some “negative energy” in the crowd, which could only be cured by some classic Hendrix. Popa’s blazing fast fretwork was quite a change from George Boone’s slower, more cautious playing. That’s not to say that Popa Chubby can’t tone it down when the moment is right – his renditions of “Somewhere Over the Rainbow” and “Hallelujah” were surprising and beautiful additions to the set. As usual, Popa’s unique humor and energy brought the crowd to life in a way that would be difficult to follow up.
Roomful of Blues has had a roster of over 40 members in its lifetime, and Rich Lataille (alto and tenor saxophone) is the only original member remaining. Many of the band members were relatively young, which made it a little strange when they mentioned that 2014 marks their 45thanniversary. The live band consists of 8 members, and this lent itself to a very full sounding mix. The brass section gave the band an energy that the previous acts lacked, and Phil Pemberton (vocals) brought the music alive with his excellent rock n’ roll voice. Although they couldn’t quite get the crowd going like the charismatic Popa Chubby could, Roomful of Blues still ended ‘The Blues Show’ on a good note. It will be exciting to see who the Colonial Theatre brings to next year’s blues show, but I’ve got a feeling that crowd-favorite Popa Chubby will be back for his third consecutive year.
Austin Hannaleck
2/23/14
Review Provided By Write A Music Review
Posted by Keith "MuzikMan" Hannaleck at 2/23/2014