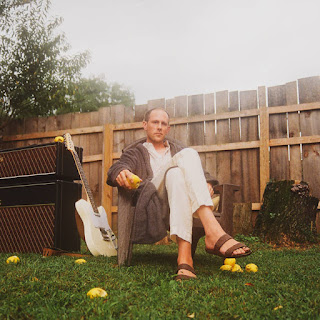 Stephen Britt is a singer-songwriter from Asheville, North Carolina. His band, Ugly Runner, put out their debut EP, “Romanticizer,” with Cleopatra Records in January, 2020. It was aggressive and raw, with little room for sorrow or sentiment. The band parted ways during quarantine, and in late July of 2020, Stephen enrolled in school at Full Sail University to pursue a BFA in Creative Writing. Taking a break from music didn’t last long. He began working on what would become his debut solo album, “Bite A Lemon” on August 8th. He wanted to touch on all the aspects of rock and roll that have inspired him throughout his life as an aspiring songwriter. With ”Bite A Lemon,” you get the familiar raw, aggressive, unpolished rock and roll, but it doesn’t end there. The record is laden with acoustic guitar, vocal harmonies, and relaxation, but it never loses the soul of rock and roll. With that, Stephen Britt presents an album that from start-to-finish should have something for everyone.

“Bite A Lemon” was written and recorded at Stephen Britt’s home in Asheville, North Carolina, from August 8th to September 8th, 2020. The album was produced, engineered, mixed and mastered by Stephen himself, and while it might show at times, it’s exactly what he was going for. Stephen’s friend, roommate, and local musician, Garett Hatch, is featured on various tracks throughout the 38-minute album playing bass or guitar. Stephen also had his friend and local musician, Ben Survant (Natural Born Leaders), lay down a saxophone solo in the opening track, “Elevator Toe Jam” to kick off the album, and he shows up again in the upbeat soul track, “Left The Party.”

Says Stephen, “Going into the quarantine of 2020, I wanted to create an album with intent. No filler. Of course, that’s the plan with every release, but to really sit down and trim the fat is something I’ve never done. It’s also not something you were able to do in the pre-COVID days, where you go into a studio, record everything you’ve prepared and that’s what you put out. It was nice to be able to sit with the material as I made it, and really create an intentional collection of what I considered the most timeless 12 songs I could write at the moment. I believe the intent of ‘Bite A Lemon’ is to not only be an outlet for me to say some things I’ve wanted to say, but also to pay tribute to the history of rock and roll with an eclectic blend of (hopefully) timeless rock and roll songs.

“My friend and roommate, Garett Hatch, had just released a solo album in August, 2020 (‘A Place With No Name’). I really enjoyed it, and thought I would give it a shot. I didn’t want to use any of my older songs. I really just wanted to write and record an album within a month. At some point during this process, Garett heard a demo version of a song I wrote at the beginning of quarantine called ‘Bite A Lemon’ and demanded it go on the album. It’s the only song from the record not written between August 8th and September 8th, and it’s funny how I considered this track only a ‘throwaway’ back in March and now it’s the title track to the record.”

To support the new release Stephen is currently working on a video for the track “Imaginary World” which he aims to release by the middle of October. He’s still figuring out the live production of “Bite A Lemon,” but with the talent of his friends in the Asheville area, it will surely be a lot of fun!

In closing Stephen has this to impart, “I know there’s a message I want people to take away from ‘Bite A Lemon,’ but I think I’m still trying to figure out what it means to me. The one thing I know is that it’s as honest as I could be without being too on-the-nose. The entire process was a whirlwind of guitars on porches, too many cigarettes, and not enough sleeping. I hope by the end of the album people love rock and roll a little bit more than they did before.”

“Bite A Lemon” will be released online everywhere on September 25th, 2020.

To Purchase “Bite A Lemon”: https://stephenbrittmusic.com