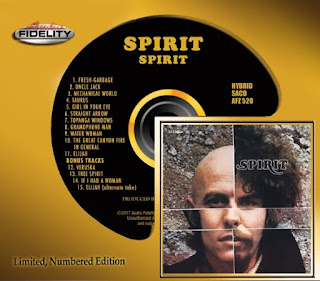 Marshall Blonstein's Audio Fidelity will be releasing Spirit's Spirit on limited edition hybrid SACD, which includes 4 bonus tracks! Spirit's 1968 debut album spent more than six months on the Billboard album charts and received heavy airplay on underground FM radio. Their music was part of the core, essence, and heartbeat of  the hippie, psychedelic, counter culture movement. The album is timeless, as fresh today as when it first appeared.

The band could play more styles than almost any other group. On Spirit they unveiled a mélange of rock, jazz, blues, folk-rock, and even a bit of classical and Indian music. The music is experimental. The vocals flow as easily as the instrumentals. Spirit struck a careful balance between disciplined studio chops, jazz improvisation, and driving rock and roll. Guitar prodigy Randy California is a clear standout, but the other band members are superb as well; John Locke's shimmering keyboards, Mark Andes' subsonic wall of bass, and Ed Cassidy's precision drumming. Big credit has to go to lead singer Jay Ferguson, whose phrasing is always just right with a wonderful spontaneous feel. The Marty Paich string arrangements are sublime.

The songs tackled unusual lyrical themes, like “Fresh Garbage” and “Mechanical World” while “Uncle Jack” showed some solid psych-pop instincts. And, it has long been debated if Led Zeppelin lifted the opening guitar lines of Spirit's “Taurus” for their own much more famous “Stairway to Heaven.”

This is an essential album if ever there was one, and it would prove impossible to trace any musical time line without the inclusion of Spirit, and in particular, this body of work.

“A true touchstone to the late sixties and the music of the times.”