Guitarist Rex Shepherd has released three albums digitally: “Ohio”, “Sonority” and “Duets”. Combining elements of jazz improvisation and harmony with an approach to guitar playing heavily influenced by diverse players such as Jim Hall, Robin Trower, Fred Frith, and sitar virtuoso Ravi Shankar, Rex Shepherd has forged a niche for himself with original music that typically lies somewhere just outside the usual genre labels but is still music that is approachable.

Says Rex, “This new music was recorded in my personal studio, much of it with other musicians in duets, and at various times throughout the last few years. The past several years have delivered to me a greater understanding of the fleeting nature of this lifetime, so I decided to release much of what I had accumulated, in part to satisfy my own need to communicate musically with the world outside of my little sphere of existence, but also I wanted to honor the musicians who played this music with me. It is these musical and personal relationships that are at the heart of creating music, whether composed or improvised, and for the people who listen to it I hope it also creates a connection between us. Much peace and music to all people, everywhere.”

Having been described as “Robin Trower meets Miles Davis”, Shepherd's music spans from full on instrumental jazz rock tunes to traditional jazz compositions with a good dose of free improvisation and sound experimentation using “prepared” and effected guitar sounds and instruments such as the “oceanharp” and the Theremin.

Shepherd's band, sometimes going under the name No End of Now, employs a revolving cast of the most creative players he can find who are willing to take part in a project that is often arranged while playing and with no limitations on the players' expression of the music. The compositions are also a blend of influences, from Wayne Shorter to John Cage, and most often are directly inspired by people, literature and other art forms, and experiences that hold significant meaning in Shepherd's life.

Says Rex, “I feel really lucky to get to play with some great musicians and always look forward to meeting new people to create sounds with...it's amazing how the same music can sound so different with the personalities of other players in any given moment. Playing with a group is a very fluid thing when everyone is listening, then responding...it becomes intuitive and ethereal, the closest thing to telecommunication I've ever experienced. When I play solo it’s similar in a way, in that I am responding to inner voices and emotional impulses in a meditative sort of way. I'm not a technical player, I rarely practice technique unless I discover a particular thing I want to use to express my ideas. With whatever technique I have, I hope that I can bring out the best of my musical ideas. One of my main influences, Jim Hall, is a master lyricist and I could only hope for a fraction of the melody under that guy's fingers. I play what I want to play and I don’t want to copy anyone, but I do a pretty good impression of myself most of the time.” 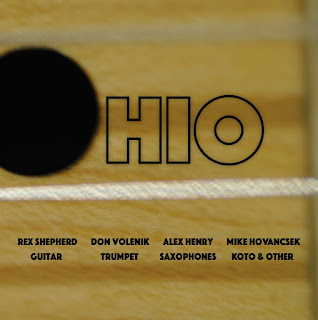 Ohio
With the exception of “Desire”, a ballad Rex wrote several years ago, the music on this recording is all improvised. The songs consist of duet recordings captured in his studio after he had returned home to Ohio for a short time. “The musicians joining me on this recording are not only thoughtful and skillful players but are also beautiful people, and I am grateful to them for their music and their friendship during my stay on the 'North Coast'”.
https://rexshepherd.bandcamp.com/album/ohio 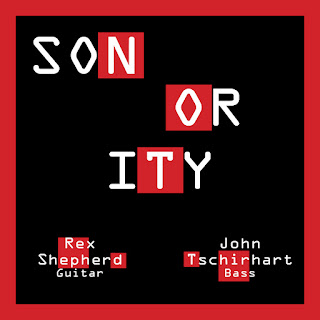 Sonority
This recent recording features a set of improvised tunes that were arrived at after John and Rex conducted their usual pre-roll discussions about the state of current affairs in the U.S. “Being fortunate enough to have two voices with which to speak out against what I see as injustice, inequality, and hatred, I felt that releasing this music, even if not listened to by many, would at least add to the spirit and energy of the peaceful movement for change taking place currently.”
https://rexshepherd.bandcamp.com/album/sonority 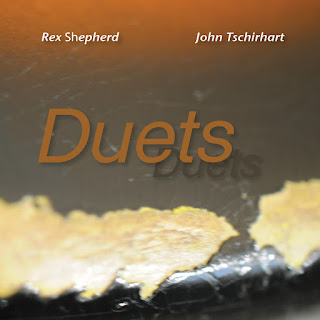 Duets
Except for the improvisations “Etude #2” and “April 9th”, this release features compositions by Rex that have existed anywhere from 15 years, in the case of “In the Shade”, to just two days before being recorded like “Happy Little Trees”. “The takes are imperfect. The music is presented here with minimal changes in the mixes so that it will accurately depict our journey feeling our way through it. I preferred to keep the imperfections so that these takes more closely resemble the music that one might hear if John and I were playing the tunes live, where boundaries are pushed and the music flows moment by moment. When challenged with making music I am buoyed by a quote from my musical hero, the great Jim Hall, 'The instrument keeps me humble. Sometimes I pick it up and it seems to say: No, you can't play today. I keep at it anyway, though.' Much peace and music to all people, everywhere.”
https://rexshepherd.bandcamp.com/album/duets 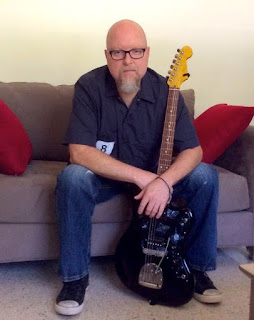