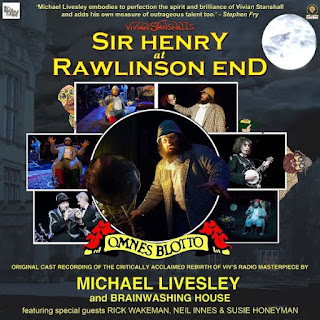 “A tour-de-force and a work of Art” - Neil Innes

London, UK - Vivian Stanshall, widely acknowledged as one of the most influential recording artists of the 20th Century may sadly no longer be with us but the incredible words he created live on via the celebrated rave-reviewed recreation of his meisterwerk 'Sir Henry at Rawlinson End' by actor, singer and comedian Michael Livesley accompanied by his trusted Brainwashing House band.

Originally created for John Peel's Radio 1 show in the 1970's, Sir Henry at Rawlinson End - the meandering gin-soaked saga of a crumbling English stately home and the grotesques who inhabit it headed by the heroically drunk Sir Henry - perfectly distilled and encapsulated Viv's absurdly hilarious wordplay and songwriting which first hit the public consciousness during the 1960s via his work helming the cult Bonzo Dog Doo-Dah Band.

The show, now in its 6th year and with the full blessing of the Stanshall family, has earned the praise of Viv's fans, friends and celebrity fans alike including keyboard wizard Rick Wakeman who, due to his admiration for Michael's interpretation, has joined the show on piano as a guest many times. This has led to RRAW Records, the exciting new label from Rick and music industry veteran Robin Ayling, proudly presenting this brand new original cast recording of this critically acclaimed stage show as their debut LP release. The recording features Rick guesting on piano, and also Viv's Bonzo bandmate and sometime Rutle and Monty Python member Neil Innes plus Viv's favourite violinist Susie Honeyman of The Mekons.

“A work of lyrical genius and poetry, on a different plane to the rest of the world” - Rick Wakeman

“What a night, an ensemble of madmen at their best, smashing!” - Rupert Stanshall, Vivian's son

“A distorted-mirror celebration of English eccentricity rooted in a riot of linguistic lasciviousness” - Andy Gill, The Independent

Videos:
“Wheelbarrow” (one of the show numbers) -