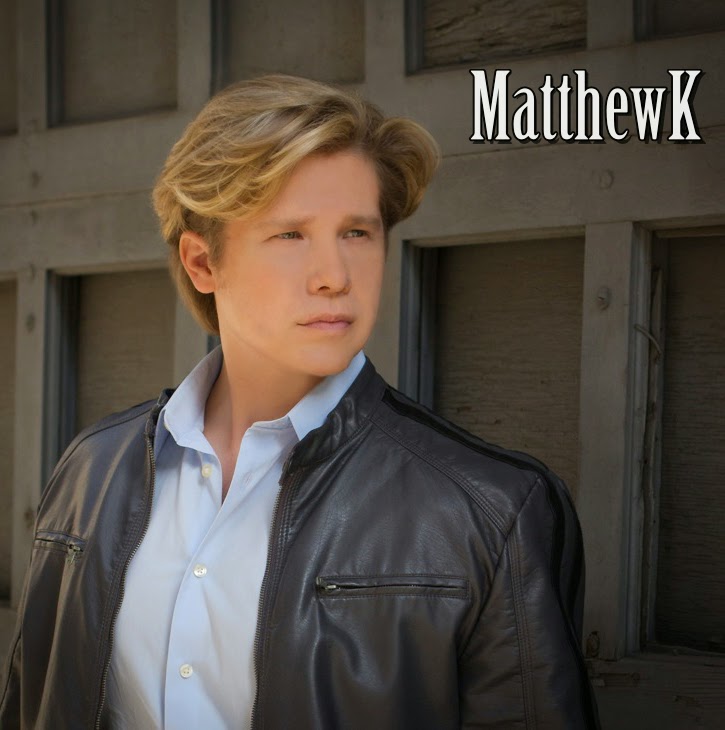 Princeton, NJ - MatthewK’s self-titled 12 song debut album captures his world-class global pop appeal and will be released physically and digitally on May 5th, 2015, and was recorded and mixed internationally in the USA, UK, and Australia. The album, a mix of Pop and Rock and even an International flavor, was recorded and produced by James M. DiLella at Rough and Tumble Studios and will be released on the Rough and Tumble Entertainment Label in Philadelphia, PA.

Chris Potter at Metropolis Studios in London did mixing for a handful of the songs on the album. Chris is best known for his work with The Verve’s seminal album Urban Hymns (The 17th best selling album in UK history), featuring the classic single Bittersweet Symphony. Chris has also worked extensively with Richard Ashcroft, The Rolling Stones (Steel Wheels, Flashpoint and No Security), U2, Paul McCartney, Blur, The Clash, Yusaf Islam (Cat Stevens), and Keane among others. Grammy Award winning mastering engineer Ian Cooper mastered tracks on the album. Ian has mastered projects by Peter Gabriel, Phil Collins, Elton John, Kate Bush, David Bowie, Paul McCartney, and Tina Turner among others.

Many other remaining tracks on the album were mixed by producer/mixer Nick Didia at Studio 301 in Sydney and Byron Bay, Australia. Since the early 1990s, Nick has been one of the most successful engineers to date, amassing over 40 million in sales with a variety of artists including Bruce Springsteen and Rage Against the Machine. Some of the other artists Nick has worked with include Train, Pearl Jam, Stone Temple Pilots and Incubus.

The track I Love These Days is set to cement MatthewK in the global public consciousness, supported by songs like Aurora, Home (originally a Michael Buble’ song and an international hit), and Only Hope which was sung by Mandy Moore for the film A Walk to Remember, as well as 9 other tracks encompassing a strong, original, commercially sublime debut offering.

Just listen. It all begins there. A voice timeless and powerful, performances engaging and compelling, Matthew is an authentic talent who began singing at just 7 years old and has been performing since the age of nine in the hallways of the American Boychoir School in Princeton, New Jersey.

While at the school Matt came to the attention of instructor James H. Litton, at the time the foremost trainer of young voices in the world. In 2014, the movie Boychoir was released which tells a fictional story based on The American Boychoir School and stars Dustin Hoffman as a character who is loosely based on James Litton himself: that of a mentor who is pushing his student (the film’s protagonist) to be more disciplined and responsible for his craft. Similar to the film, Matthew was a student whose relationship with James was combative at times, often due to Matthew’s rebellious attitude, but James continued to push him to excel. Under Litton’s tutelage, he was soon promoted to soloist, working closely with the finest in the industry and performed at Lincoln Center, Radio City Music Hall, Kennedy Center, The Academy of Music and Carnegie Hall. Matthew graduated from the school as Best Choirboy, and at the ceremony James indicated to the graduating class that he had built the sound of the choir on the young man’s voice.

During his high school years Matthew laid the foundation of his dream of becoming a recording artist. Tired of formal musical education, he set out on his own path to discover his true artistic and musical talents.

Rejecting a traditional career path, he dedicated his life to creating and performing as a singer/songwriter/band leader, crashing and burning in numerous attempts as leader of garage band hopefuls. Undaunted and resolute, his love for pop music and passion for the craft of songwriting has long fueled his every waking moment.

In listening to him sing, one can clearly hear him in a club, theatre, hall, arena, and football stadium as if it has all already happened. His ability to deliver in Spanish and Italian truly underscores the caliber of artist he is. You can close your eyes and ‘hear’ him performing duets with giants of the industry and belonging right there in that moment. His live performances are electrifying and he has no shortage of female fans. For Matthew, the journey has always been about live performance and the music, and he hopes it will always remain so.

MatthewK releases physically and digitally worldwide on May 5th, 2015. He will be performing a few select shows in the North East to support the album’s release.

For Information on Booking MatthewK contact James DiLella at Rough and Tumble Entertainment james@roughandtumblestudios.com
Posted by Keith "MuzikMan" Hannaleck at 4/05/2015