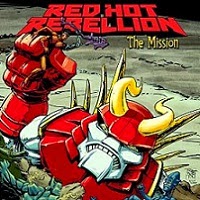 With the self-described genre of “Soundtrack To A Bar Fight,” Red Hot Rebellion certainly has the right attitude for playing hard rock music. And it is not all bravado either, because it is hard to overstate the brilliance of their new album, The Mission. Formed in 2010 in Dayton, Ohio, The Mission is Red Hot Rebellion’s second full-length album (which comes with a 64 page comic book). Consisting of Jim Tramontana (bass, leading vocals), Doug Spencer (guitar, backing vocals), and Andris Devine (drums, backing vocals), these guys are at the top of their game of their new, concept album. With a great sense of humor, catchy riffs, and a hard rock sound with plenty of punk and metal influences, The Mission is one of the first great albums of 2015.
“Super Epic Intro” gets The Mission rocking and rolling with the sounds of some blazing guitar work and rhythmic drums. Things definitely get off on the right foot, as this grand opening builds anticipation for the rest of the album. If the intro left any doubt in your mind, then “The Mission” will wipe them all away. It is one fantastic rock song. There is so much power and passion here that I am left thinking that these guys could level walls with their music. With its hellraising attitude, “The Mission” is gets the blood pumping and the heart racing. The music rolls right along with “Alright Alright.” The sound is a bit lighter, a bit catchier with its punk rock influence. Heavier and harder, “Prepare to Be Destroyed” delights with great guitar parts that really shred.
“You Bring the Thunder, I’ll Bring the Lightning” has great manic energy running through it, kick started by its opening riff. The music is just relentless, and backed by the lyrics, the song makes for a great party anthem. “Black Magic Dynamite” is a song that has it all. Everything about it is just on point. The lead and backing vocals just play off each other so well, while the guitar and drums never miss a mark. It is one of the best rock songs that you will hear all year. If you need to hold up a song that showcases the catchy riffs of Red Hot Rebellion, then “Battle Royale with Cheese” is that song. It is another pulse pounding song to start a bar fight to.
Promising that they are “Gonna get blitzed tonight,” “Dirtbags and Halfwits” is a great example of Red Hot Rebellion’s humorous and party sides coming together to make one romping rock song. With its electrifying energy, “The Seething Horde” is a sweet mix of punk and hard rock, with the album’s catchiest chorus that you will just want to belt out. Going into the home stretch, “Hellabyte” and “Victory Is Ours (For Now)” keep things energetic, fresh, and interesting. “Melt the Sky” and “The End (It Begins)” bring the album to a close with two memorable hard rocking tracks, especially the latter with the all the quintessential ingredients that have made this album so fantastic.
Red Hot Rebellion’s The Mission is a marvelous achievement for many reasons. Not only are the performances nothing short of top notch, but also it is a complete album, which seems like something of a rarity these days. There is no filler to found here, making for an album that you will want to listen to from start to finish. I would be very surprised if The Mission is not in my top 10 rock albums at the end of the year. I cannot recommend it enough right now.
5/5 Stars

Tracks:
01.Super Epic Intro
02.The Mission
03.Alright Alright
04.Prepare to Be Destroyed
05.You Bring the Thunder, I’ll Bring the Lightning
06.Black Magic Dynamite
07.Battle Royale with Cheese
08.Dirtbags and Halfwits
09.The Seething Horde
10.Hellabyte
11.Victory Is Ours (For Now)
12.Melt the Sky
13.The End (It Begi)ns