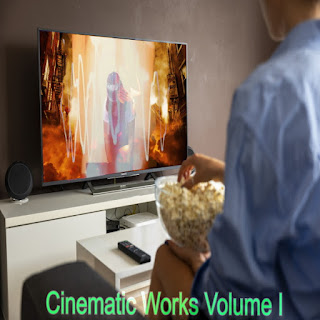 A double album of 50 epic compositions inspired by cinematic artists such as Hans Zimmer, Howard Shore, Rick Wakeman and Vangelis

Athens, Greece - Experimental musician and author Billy Yfantis, releases his 4th solo album entitled “Cinematic Works, Vol. I”. The double album consists of 2 disks featuring 50 instrumental cinematic tracks inspired by the soundtracks of Epic movies such as “The Lord Of The Rings” and “Stars Wars”. The album is the first part of a series of cinematic music albums that Billy intends to release in the next years.

Disc 1 includes compositions that capture the sound design of dramatic, epic scenes of Fantasy Adventure and Sci-Fi movies. Symphonic Classical Music is used as a medium to create a heroic and atmospheric soundtrack for sophisticated listeners. Disc 2 continues the trip of Epic sounds and operatic influences however, there are additional tracks with Jazz and Ambient music elements to complete the puzzle of the atmospheric music soundtrack.

Billy Yfantis, except his solo recording career, has a very busy schedule with other related activities. On Jan. 27, 2021 he participated as a guest presenter at the   Hollywood Music in Media Awards (HMMA) by presenting the nominees/winners of the “Best World Music” and “Best Lyrics/Lyricist” awards. You can watch the whole event here:  https://vimeo.com/505567704 Moreover, later in 2021 he remixed a track from the Desert rockers Sons of Alpha Centauri which was included as a bonus 3-inch CD on the vinyl format of the recent album “Sky Island” by the Yawning Sons (project by members of the Yawning Man and Sons of Alpha Centauri). Billy Yfantis plans to experiment with new instruments and technologies for the recording of his 5th full album with a release schedule in mid-2022. Stay tuned for more information!

Famous Quotes (What Others Have Said)
Krautrock legend Harald Grosskopf (Ash Ra Tempel, Klaus Schulze, Cosmic Jokers): “I always like electronic music made by younger musicians who consequently follow their personal instinct, rather than trying to copy what’s already been made in the past, in the spirit of: Whenever you meet Buddha kill him. Keep on tracking Billy!”

Bobby Borg, (Music Business Author, Consultant, Professor): “This is fkn bad ass music that everyone needs to hear… imagine the coolest meditation music out there and the coolest sci-fi movie soundtrack rolled into one! Stream it and trip out today.”

Snowy Shaw (ex-King Diamond, Therion, Mercyful Fate): “I didn't know what to expect when I had this album sent to me by the composer Billy Yfantis. To be perfectly honest, 9 times out of 10 when people send me their new album it makes me feel a bit uneasy and awkward. Firstly because I don't listen an awful lot to contemporary music and secondly, even less to other metal & hard rock artists due to lack of interest and I don't wanna hurt their feelings. I don't mean that in any rude, disrespectful or arrogant way, but I'm into creating my own music, not so much into consuming music of my peers. However, this was something entirely different. I'm not even sure it's considered music, but it's the kind of atmospheric and meditative type of sounds that I've been listening a helluva lot over the past few years to try relax and cope with my stressful, turbulent life, constantly on the verge of being burnt out. That being said, I liked it and it made me calm, mindful and sleepy. Presumably the worst kind of reaction my metalhead peers would wanna hear about their new album but in this case it's probably the best sort of compliment one could get.”