Craft, a Post-Enid Band Project From the Early 1980s, Has Their Sole Album 'First Signs' Re-Released with 8 Bonus Tracks as a Definitive Edition. OUT NOW! 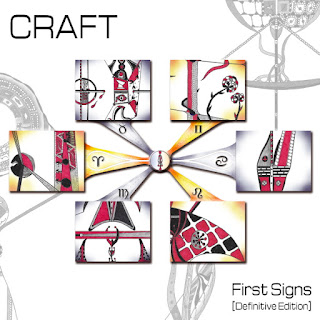 Including eight bonus tracks, four of which are remixes from the original set along with two previously unreleased tracks ‘Despina’ and ‘Dmitri’s Lament’.

With artwork by Willie Gilmour and liner notes by Martin Russell detailing the history of the band and the making of the album.

Featuring pieces inspired by signs of the Zodiac, the album has been out of print since the mid-1990s, this definitive edition has been remastered from the original master tapes by Martin Russell, this definitive re-release a labour of love for everyone involved.

Of the definitive re-release, Martin Russell said “I'm so happy that this body of music (from half our lives ago!) is getting a carefully-curated release befitting this century's listeners, whether they've previously heard the 1984 vinyl, the 1991 CD or are coming fresh to what we did back then. Reconnecting with Willie and Grant and recollecting our ambition and our collective bond has been an unexpected and joyful by-product of preparing this definitive edition. I'm very grateful for the opportunity we've been given to revisit our musical past and to provide a glimpse into 'what might have been' via the additional content.”