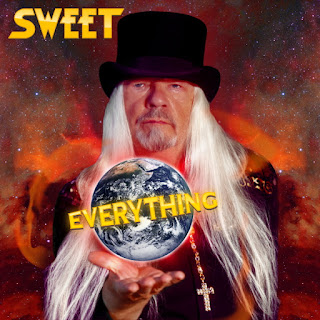 Sweet (Featuring Andy Scott, original guitarist/songwriter of “Fox On The Run”/ “Love Is Like Oxygen”) have released their new single “Everything (2021)”.

“Everything” originally appeared on Sweet’s 2002 album “Sweetlife”, however the band’s founding member and guitarist Andy Scott was inspired to re-record it after witnessing the new incarnation of his band rehearse the track live.

Andy explains, “During the rehearsals for Sweet’s forthcoming UK tour 2021, we were trying out various songs from our back catalogue that could be added to the set list. As soon as I heard Paul Manzi and Lee Small’s vocals on the song ‘Everything’, I knew that we needed to get it down and record it as our new single.”

Commenting on the brand new recording, “Everything 2021”, Andy Scott adds, “I think the new version is a far superior production. It’s much closer to how I envisaged it when I co-wrote the song back in the day.”

Andy Scott is the only surviving member of the ‘classic’ Sweet line-up following the death of former bassist and founding member Steve Priest in 2020 aged 72. Brian Connolly and Mick Tucker passed away in 1997 and 2002 respectively.