In Concert At The Academy of Music - Northampton, MA 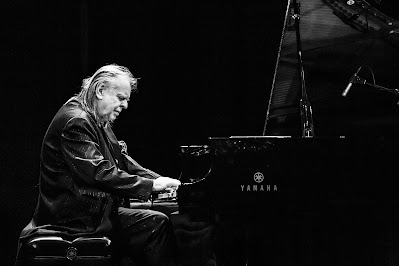 Rick Wakeman is a name synonymous with the terms “rock star,” “rock legend” and “keyboard wizard.” He has been around long enough to be tagged as the progenitor of those very terms. His time with various incarnations of the Yes group members, to prolific solo recordings dating back to 60’s, populates his immense cannon of work.

I have seen Rick perform with the classic Yes lineup and the 80’s lineup that featured Geoff Downes. I have been a fan of Yes and Rick’s solo albums for many years.

This was an event that held a lot of anticipation for me and I understood it was going to be just Rick and his keyboards. There was a bit more to it than that however, he told humorous jokes and stories in between each song. And quite honestly, I found nothing “grumpy” about it at all. That tag is definitely a hint at the kind humor this gent likes to share.  I got a good idea of this man’s sense of humor when I interviewed him in July 2020 shortly after the release of his fantastic album The Red Planet, which I had the opportunity to review as well.

The venue in Northampton is a beautiful and intimate seating arrangement. I have never been that up close with any of Rick’s performances. This particular performance gave me an opportunity to see his artistry in all its glory. In the purest sense of the word, Rick is a musical genius. How he remembers how to play all of those lengthy tracks like selections from The Six Wives of Henry The VIII and Return To The Journey of The Center of The Earth is beyond my understanding.  His brain is most certainly wired quite different than us average folk.

The opening track, “Seahorses,” was quite different than anything I had heard from Rick. It was a beautiful ambient arrangement and would not set the tone for what we would listen to going forward.  “Katherine of Aragon/Catherine Howard” was excellent, and the changes that those two songs went through boggled the mind.  The acoustic piano certainly has a way of interpreting songs quite differently, and there is no comparison between that and an electronic keyboard. Although there was an appreciative crowd in attendance, the response to “YES Medley: The Meeting/And You And I/Wonderous Stories” received a rousing round of applause. That did not take away a thing from his solo pieces, but I believe it was more of a familiarity thing for fans of Rick and Yes.

I really appreciated how Rick goes about his business on stage. Watching him play is really something. He works the keyboards with precision and each hand is doing something entirely different. The effect of that concise and rapid playing of the keys is astounding, and it comes out sounding like two people are playing. 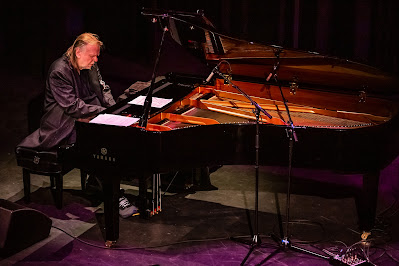 I always counted Rick as the best keyboard player in the world and still do with Jordan Rudess right there with him. His level of musicianship and retainment of music is coming from a different level of insight than most. He has been in demand with artist such as David Bowie and Prince. This long line of musical partnerships is a rare thing in music and his output still continues with newly recorded selections and his busy schedule touring.

The one thing that caught me off guard was the need to provide proof of vaccination for COVID. I do carry my card so that was not an issue. What I was told by a staff member there was that it was city mandate and a necessity requested by the artist. I understand why Rick or any other artist would do it. Making music and performing is their livelihood and they cannot afford to be exposed to such a thing that could have dreadful and debilitating consequences.

If you are a fan of Rick Wakeman’s music and wish to see him in a more intimate setting and learn about his life in music, with the added pleasure of his distinct English humor, then I would highly recommend attending one these events.

My sincerest gratitude to Chipster PR for providing the passes to the show and David Barnum for the wonderful selection of professional photographs.