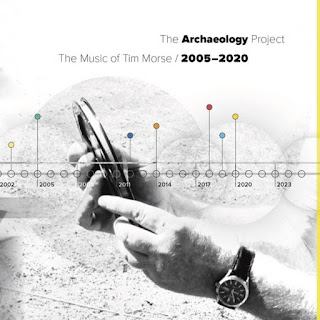 Typically, I see the word ‘compilation’ in music and I overlook every part of it, often because it signifies “Greatest Hits” or “Best Of.” And as a writer, I usually want more than just the hits of someone because the hidden gems are found outside of the singles. Plus, if you find a song apart from the singles, you don’t grow tired of it as quickly because it does not frequent the radio as promotional singles do. In this case, the compilation of The Archaeology Project by Tim Morse is excellent in presenting a timeline of his work.

With no definitive reason for releasing this record, Morse says,” It seemed like a good time to reflect on the last fifteen years of being a recording artist.” Reflection can be a good way to spark that new creative edge. “Guitar Etude 1” roots from his very first song so, it seems fitting that the bit piece starts off the record.

“Apocalyptic Visions” is a three-part song that is his longest piece to date. AV is a blend where the keyboard sounds much like an intergalactic travel scene, followed by what could sound like a take from a 90’s Alternative group like Good Charlotte blending with a speed-metal song cut, and ending with a mix of peaceful chime and keyboard but also going back to the powerhouse guitar playing. “Adrift” is a self-reflective journey piece that initially was just an instrumental work for the longest while.

“Rome” contains a Shakespearean-type of imagery that plays to the advantage of the artist and genre quite well. It is the epitome of an epic tale. “The sky is burning. Nero plays on….” Is the perfect symbolism for today’s pop culture/political chaos while giving a temporary historical lesson too. “Voyager,” according to Morse, was “inspired by the Berg and his book on the Lindbergh historic flight.” It is a mainly wondrous instrumental track that takes to new heights.

“Window” winds the first half of the record down with this soothing guitar piece that was thought of as a segue for his prior album Faithscience. The short track calms the listener’s ear down and prepares them, for more to come. “Afterword” keeps with the more melancholy tone but, not for the reasons you may think. Instead of saying goodbye to a love or a relationship of sorts, it’s the foundation for new beginnings moving forward and a reflection of events gone by.

“200 Yards” is a funny ‘crush-gone-wrong’ song that Morse says is the first-time-ever collaboration between him and Bret Bingham on Mangoes. The very tongue-in-cheek, watcher song, is a fun session Morse and Bingham created to simply make music. “My Ally” talks of a friendship that has lasted through the ages. I think it’s THE song I or anyone could connect with so deeply because, as an overly open and friendly person, to begin with, I love the multitude of reasons certain people come into your lives. Friendship is so much more than just a bond, it’s an experience like none other.

“Inertia” is a funky psychedelic feeling song that as the song plays out, causes an expansion of sorts. It crescendos into a musical spacetime continuum. “The Mary Celeste” speaks of the sudden loss all of us experience at one point or another. The hurt is so grand, and sometimes it is impossible to deal with moving forward, we remain still for a while, “lost at sea.”

“The Marquis” is the sign we all read in our own minds in one form or another. We over-analyze our certain actions to which we question if it could’ve been worked out differently, or if it was the correct plan of action in the first place. But the marquis is always hovering above our mind trying to intimidate us to keep on questioning ourselves.

Originally done by Pink Floyd, “Dogs” was a long desired song to cover for Morse and by molding the song to his artistry, he molds it into more of a singer-songwriter style than its original predecessor. In finalizing the record, “The Corners” is a cleverly-placed track to end out The Archaeology Project. It is a beautifully orchestrated piece representing the excitement to see what lies beyond our lives here on earth.