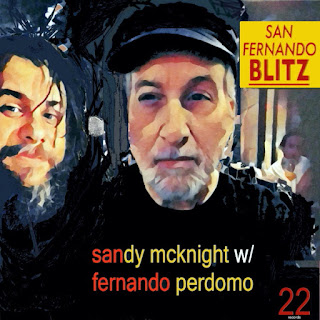 After last January's release of their successful first collaboration, Albany-area artist Sandy McKnight and Los Angeles' ubiquitous multi-instrumentalist/producer Fernando Perdomo are about to hit the road running with this year's model,"San Fernando Blitz".

Their last set, "San Fernando Beat", met with wide acclaim, with critics and fans alike. Named 'best EP of 2020' by PowerPop News, the songs "Any Time of Day" and "Fake" were breakout hits, getting national and international airplay.

The new EP by the team features 6 power pop killers, with the first single scheduled to be the dancy-hooky "Living on the Westside", due out January 4.

McKnight has been an in-demand bassist since the 70s, and has worked with many notables as a musician and producer. His large catalog of self-penned songs can be heard regularly on TV and in films.

Perdomo has become one of the top session players and producers on the west coast. He's been called the 'Todd Rundgren of L.A.', and was featured with Jacob Dylan in the recent documentary 'Echo in the Canyon', now playing on Netflix.

This new set highlights Perdomo on guitar, drums and keys. McKnight plays bass and sings leads and harmonies on all 6 tracks. Recording took place at Reseda Ranch Studio in L.A., and Systems Two in NYC.

The early buzz from those who've heard the preview tracks has been enthusiastic, and the boys are hopeful they might have the best EP of 2021 as well.

The EP will be available for download after January 11 on Bandcamp, and streaming on Spotify, YouTube, and Soundcloud