The Encyclopædia Hawkwindia The Ultimate Guide to More Than Fifty Years of Hawkwind by Dave Thompson Now Available! 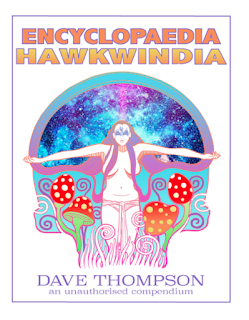 The Encyclopædia Hawkwindia is the ultimate guide to more than fifty years of Hawkwind, from the first show in August,1969, to the next scheduled gig in February, 2021.

There are entries for members’ pre- and post-Hawkwind projects - Magic Muscle and Krel, Smartpils and Spirits Burning.

For like-minded travellers through space rock and beyond - Michael Moorcock and Motörhead, the Pink Fairies and Gong.

For the Bath Festival and the Battle of the Beanfield, Stonehenge and the Great Pyramid of Cheops.

PDFs for review and author interviews can be requested from hawkwind_encyclopaedia@yahoo.com.

ABOUT THE AUTHOR
Dave Thompson is author of over 150 books, mostly on music, but other themes besides.