Rock Review: James Williamson and Deniz Tek-Two to One 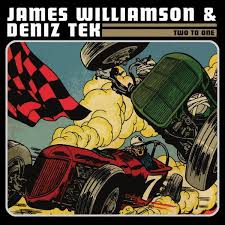 James Williamson and Deniz Tek find themselves in a fully-loaded, revved up new music venture, Two to One. The Stooges’ guitarist James Williamson and Radio Birdman’s Deniz Tek team up once again from 2017 and Tek’s 2011 special guest appearance from Iggy Pop and The Stooges’, to unveil a new progressive-rock, garage-punk blend album that is sure-fire to get you rocking out in your garage like the olden days, or on the next neighborhood block party. Coming September 18, Williamson and Tek team up to bring you an album that takes the seriousness out of your everyday life, even if it is just for a moment.

The album explodes onto the scene with “Jet Pack Nightmare.” With its ZZ Top sound-a-like guitar riffs, the song is a great starter. If you listen close enough, it sounds like a timed race of revenge on someone before the person seeking the retribution wakes up. “Progress” sings of being forever in the moment. Where we are recognizing our faults of personal history, we also acknowledge that “tomorrow never comes,” meaning, time is just a construct to some and we will rectify our issues when we feel it necessary or imperative.

“Take a Look Around” is a slower touch of ‘90s ska/alternative music, with a representation of calling out modern-day civilization. It says to observe what is right in front of us, admiring the completely wrong ideals and lifestyles, rather than maybe focusing on our self-improvement and growth. “Good as Gone,” writes itself in its lyrics. A man who has reached his point in tolerating the other party in question. He sings as though this person has pushed him to where nothing can justify him trying to mend the relationship.

“Stable,” is the lead single off of Two to One. The lead singer claims to be in a sort of freefall where nothing anyone does can save him. From when others around him first met him, his character or personality is slowly cracking with imperfections. He feels as though no matter what someone tries to do to help him, it will be nothing but failed attempts. “Climate Change” is a bit of a random tune. While it certainly does call attention to the modern-day debate of ‘climate change’ it seems to be a play-on mockery of the topic. Some of the hypocrisy, and an old vs. young them, provides comedic relief that is subtle but funny.

“Birthday Present” starts with a smooth guitar lick, and the title lends the listener to think it will be something positive and uplifting until the singer begins singing. The song is based in a darker-than-expected tone and a very scattered concept of a celebration, more like the ending of one messy party. “Small Change” begins as a bit of an Americana-rock styled song. For a sudden shift, “Small Change” hints at glimmers of positivity and subtlety peaks at how emotion can increase the effects of the changes in life. A “big heart,” to this singer is key to morphing your life to the way you desire it to be.

“Liar” calls out the singer’s significant other straight to her face. He proclaims what a lot of us feel when we’ve hit the end of the road with someone. “Except the diamond in your ear, nothing last forever” is possibly the boldest claim to how far tolerance can take a person. This woman cannot see right in front of her the actions that led up to the separation about to occur. “No Dreams” is a spiral. The singer is lost within himself, trying to find something to connect to on a physical level of which, unfortunately, failure strikes him at every turn. The song is a fantastic way to represent how our psyche can easily be manipulated and played with. Ending out the album, “Melissa Blue” is of a seductive lady who has an aura of mystery about her, only to end in heartbreak. The song tells of a whole tale of meeting up, a small dose of adventure, and inevitable heartbreak as the two, part ways.

Key tracks include: “Good as Gone,” “Stable,” and “Melissa Blue.”