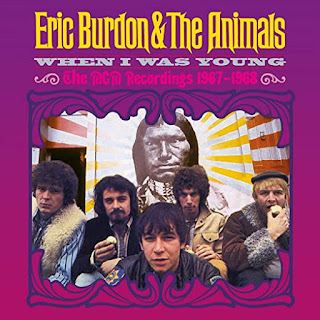 When I Was Young – The MGM Recordings 1967-1968 is a 5-disc set covering Eric Burdon & The Animals. Each of these discs shows a pattern. As you stream through the music, the tone and themes overall go from disc one, and five shapes themselves up to be more of a darker sound than that of the other three discs. In ascending order, discs two through four increasingly become a bit lighter with the themes surrounding them. Minus a few extra tracks and one being formatted in stereo and one for mono, the two bookend discs play out similarly. It’s well worth playing on a day of reminiscing or if you might have a grey feeling throughout your day.

Eric Burdon & The Animals came about in 1966 when the actual band The Animals abruptly parted ways, he formed a similar but newer version of the group. It took hold of a Psychedelic rock type of influence rather than that of its former R&B stylings. He possessed a particular skill few in the Rock world could bring to life and not have the message and sound overdone or duplicated.

Disc two still carries a bit of a darker undertone but, generally, The Twain Shall Meet is an album of eventfulness and storytelling. You can feel a sense of wonder and awe in songs like “All Is One,” and “Just The Thought.” The album is rightly titled because it comes off very poetically. However, it also speaks to songs of war and unfortunate sorrow in the song “Sky Pilot.” You get an action-packed album amid this packaged deal.

Everyone Of Us is a blend of items. It contains an instrumental piece, “Serenade to A Sweet Lady,” along with a spoken-word track of “The Immigrant Lad.” It also includes a short story-styled song of “New York 1963 – America 1968.” You can tell by the titles of the tracks, that a lot of historical context surrounds the entirety of this album, and while it may be for a select group of ears (as many may not find the album impactful), it does carry an impressive framework about it.

Think of disc four as the icing on the cake, or the joy and celebration of light after a series of unfortunate events. There’s a common theme of love and its lasting effects both good and bad. “River Deep, Mountain High,” is that excitement burst of how much intensity one’s love could be another while, “Ring Of Fire,” represents how much power and heat can be put into love itself and loving someone, who may or may not return the same feeling.

This album certainly has an eclectic sense of emotion and lessons to be learned. Moreover, it is a great representation of laid back, mellow vibes to give younger listeners a sense of how music can captivate both a message and create an endless earworm to soothe the mind after an eventful day or stimulate the mind to think more introspectively.

Disc Two: The Twain Shall Meet

Disc Three: Everyone Of Us