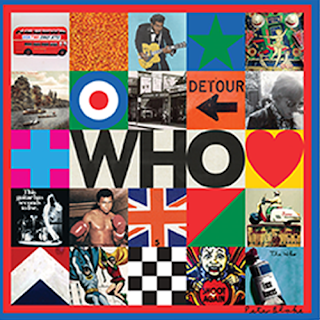 It has been said that before death, one’s life flashes before them. With threads from their 55-year history as the loudest and most influential band on the face of the earth woven into the music, The Who’s latest
release, WHO feels like such a flash. It is a journey through the past, a reminder of their power and influence, and a defiant “Love, Reign O’er Me” cry from the front of the stage. No, The Who will not go gentle into that good night.

Pete Townsend has never been accused of holding back. Whether as the deaf, dumb and blind, Tommy or the alienated mod Jimmy, Pete bares the soul of the characters he’s created who are misunderstood and marginalized by society. Pete invented not giving a fuck conveying to disaffected youth, that not only is it okay to be true to yourself, but you will also suffer if you don’t. The energy and aggression The Who as a band, bring to Pete’s songs, amplify both the sound and the fury producing enduring and inspirational anthems.

After hearing the first lyric on WHO, “I don’t care, I know you’re gonna hate this song.” I pumped my fist with excitement and defiance. It’s not exactly “I hope I die before I get old,” but 54-years later, the attitude is the same. Who fanatics will agree that Pete’s lyrics can contain not-so-subtle digs at Roger, and I can’t help think that this is one of them? …
"that’s fair, we never really got along.” The union of Pete and Roger has survived a half-century, and while oil and water don’t quite mix, they look pretty cool when you shake them up.

While the surface of these songs is polished, the underlying structure is diverse and complex. Supported by accomplished musicians such as Benmont Tench (Tom Petty), Pino Palladino (The Who), and Joey Waronker (Beck, REM), and at times a full-blown orchestra, the arrangements are multifaceted, and the richness is palpable. It is apparent that perfectionist and original studio gear-head Pete Townshend fussed and fine-tuned until he got it right.

Many of these tracks bring to the present, echoes of the past. “All This Music Must Fade” unearths “The Music Must Change.” “I Don’t’ Wanna Get Wise” resurrects “My Generation.” “Detour” is a nod to the original band name and conjures the foot-stomping freestyling “Join Together.” “Rocking in Rage” is a soul-bearing confession reminiscent of the driving introspection of “The Real Me.”

Not all these tracks hit the famed red, white & blue mod target, however. The Simon Townsend (Pete’s brother) penned “I’ll be Back” is more of a love song that seems out of place and better suited for yacht rock than classic rock. “She Rocked My World” has a sleepy Latin jazz vibe making it feel tired and misplaced. Simon’s other song on WHO, “Break the News” is far more upbeat and a catchy Mumford & Sons-type romp.

Worth noting is the deluxe version, which contains three bonus tracks, two of which are forgettable. The third, however, “Got Nothing to Prove” is a previously unreleased early-60’s gem. Re-orchestrated, it exemplifies the ambition of the band at a young age and nothing short of groovy, baby, groovy.

All in all, this is one impressive offering. The Who have tapped into the well of ingenuity to create the most surprising album of the year. Now in their mid-70’s, Pete and Roger have produced a collection as big and bold as any fan could hope for. After all, old age should burn and rage at close of the day, or as Roger sings in the closing track “Rocking in Rage,” “defying the clock in one last rampage.”

Let’s hope this isn’t The Who’s life flashing before their eyes, but an example of what groundbreaking (and guitar breaking) bands are capable of in the twilight of their careers. This Who fanatic is thrilled they didn’t die before they got old as this is where some of their best work has been born.