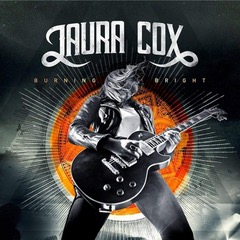 French guitarist and vocalist, Laura Cox’s sophomore release, Burning Bright, does not presume to blend, overlap, or invent genres. It is Rock and Roll straight, no chaser. There is no trickery here, no curveballs, sliders or screwballs. Burning Bright is a blues-based rock and roll fastball right down the middle.

Laura Cox’s rise to fame came about via social media when homemade videos of her classic rock covers on YouTube went viral back in 2008. After accumulating over 60 million views, she assembled “The Laura Cox Band,” and this lineup spawned 2017’s critically acclaimed Hard Shot Blues and has stayed intact for Burning Bright. Her playing pays homage to Jimmy Page, Toni Iommi & Billy Gibbons, yet leaves enough room to blaze a path all her own. Her vocals blend the badassery of Lzzy Hale with the soulfulness of Melissa Etheridge.

Since Laura Cox is bearing the torch of the New Classic Rock movement, it is difficult not to call these tracks derivative. After all, that’s the bus she rode in on. The lyrics on songs such as “Fire Fire” and “Freaking out Loud” are as simple as anything you might hear from the mid-80’s metal bands such as Motley Crue, and Bon Jovi. Yet, the underlying musicianship is far more complex, and the shredding more extraordinary.

This reviewer gravitated more towards the less in-your-face rockers and the slower blues-based tracks such as “Bad Luck Blues,” “Looking Upside Down,” and “As I Am.” These tracks inject some space into the songs allowing Ms. Cox’s guitar and vocals to breath. The result is that the listener breaths as well, taking in and appreciating the entirety of each song.

With her Les Paul Bacchus Duke guitar, Laura Cox is defibrillating the heart of Rock and Roll, which some have prematurely written off as dead. So, if you like your Rock hard, heavy and heartfelt, Burning Bright will burn brightly for you.