Eric Gales In Concert At The Stationery Factory In Dalton, Mass.
With The BTUs
October 13, 2019
https://www.ericgalesband.com/
https://stationery-factory.com/ 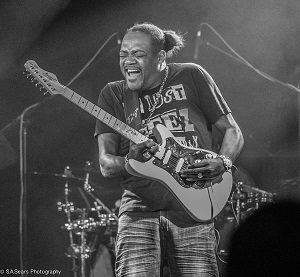 Dalton, Massachusetts got to witness one of the best guitar players on the planet cut loose last night. Eric Gales (AKA Raw Dawg), was on stage at the Stationery Factory, one of the newer venues in the Berkshires that I have become very grateful for. Now we have another old mill repurposed for many different uses. The building holds more than just a stage, it actually has five stages. They have performances in the Gallery, the North Room, Honor Roll Studios and at the Shire. The concert was on the main stage this evening. It also includes several businesses including a restaurant and distillery where they make Vodka and provide the concert with a nice jug of pristine water for its patrons. Which is free by the way.

The night opened with local band the BTUs to warm up the crowd. They provided an excellent set of blues-rock. You could tell they were a seasoned band that had their chops down straight away. They feature two slick guitar players that can sing up a storm and an animated keyboard player that can sing as well. To round off their band there is a decidedly younger member behind the drum kit that is always smiling. The keyboard player provided the bass with the bottom tier of his keyboard and the actual keyboard sounds with the top tier. That is quite the trick I must say! 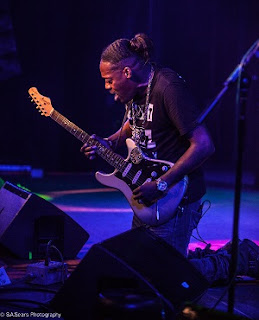 After a short break and breakdown of the first act, we all got ready for Eric Gales. I remember getting Eric’s very first release back in the early ’90s. From that point, I did not pursue his output, a big mistake on my behalf. He now has 18 albums out! The latest release is titled Bookends. Seeing him lived showed what I was missing all these years!

Eric is a new man. With the help of his dedicated wife LaDonna he battled his demons and kicked a long-standing drug addiction. He is very upfront about his life and feelings and man does it ever come pouring out of him through his music! He has a killer rhythm section, a bass player and two percussionists, one being LaDonna, who has a beautiful voice by the way. It is a family united, as their lovely daughter attends the merch table as well.

The venue and stage are very personal and up close, there is not a bad seat in the house, with comfortable chairs provided of course. The capacity is 500 although there was not that many in attendance. Regardless of how many folks attended there was enough of us to make some noise in response to Eric’s amazing performance. The crowd was well behaved, appreciative, and respectful of each other. I had to mention that because it's not always that way.

Eric is a very animated and energetic performer and he plays a guitar left-handed with upside-down strings, just like that other great six-string bender named Hendrix. I have heard people say he is like a cross between Hendrix and Stevie Ray, which I could not argue. He is making a lot of headway to superstardom with his album Bookends debuting at #1 on the Billboard charts when it was released on Mascot Records (one of my favorite labels). And with Joe Bonamassa (another great blues guitarist) backing him and playing the album on his Sirius radio channel, he is finally getting some well-deserved attention. 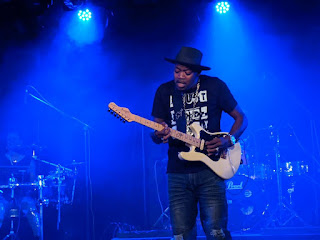 Any good music, rock, in particular, is blues-based. Eric takes a little bit of everything - blues, rock, jazz, funk, and that creates his sound. He has a definitive harder edge to his faster moving songs and an excellent voice to match. I thought of the great Albert Collins more than once while listening to him. That is a great compliment, as Albert was the master of the telecaster.

Eric played many of the tracks off his new release including “Southpaw Serenade,” “How Do I Get You” and the matter of fact “It Just Beez That Way,” which everyone on stage was wearing on their T-Shirts, and available at the merch table. Eric got the crowd chanting that phrase as well. He owns that stage and the audience loved him.

The other thing I appreciated besides the great music was the interaction of the band members with Eric and how they watched all his cues. In particular, was the husband and wife exchanges, you can tell they really love each other and are enjoying every second of their time together on stage.

If you take a look at where Eric has performed this year it is a list of Blues Festivals all over the world. That does not surprise me in the least. He is one of the top guitar players of the genre in the world today and it was a pleasure to see him perform live and meet with him after the show.

Eric Gales is a premier act that is a must-see if you either love the blues or can appreciate a great guitar player. If that is the case, then you need to get your tickets and catch a show. 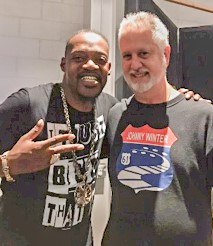