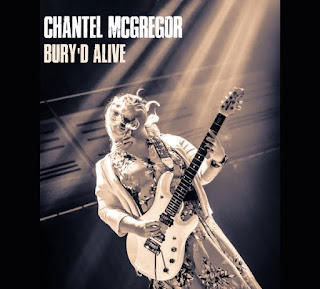 Chantel McGregor has released her highly anticipated new live album “Bury'd Alive” which is available on CD and digital download.

Chantel and her band recorded “Bury'd Alive” at the prestigious venue, The Apex in Bury St Edmunds, UK on the 29th of March 2019. Being one of Chantel's favourite venues, The Apex seemed the obvious place to record her first live album.

“Bury'd Alive” brings together tracks from her first two albums, “Lose Control” and “Like No Other”, together with crowd favourite, the anthemic track “April” which is only available on this album, all played by a power trio, with no studio trickery or multiple night recordings, this is exactly the excitement and performance as it was on the night!

Produced, mixed and mastered by Wayne Proctor of House of Tone at Superfly Studios, the album was sure to sound incredible and capture the night as it was, a night and album to remember.


About Chantel McGregor:
'Up next was someone I have seen before, Yorkshire’s very own Chantel McGregor. Her shy, “girl next door”, off stage persona combined with her soft spoken Yorkshire accent belie the power and energy of her performance on stage. Chantel didn’t become a professional musician by accident.

She’s been performing live gigs since the age of 12, schooled at a music college and achieved a First Class Honours Degree in Popular Music. Along with her current band members, Colin Sutton on bass and Thom Gardner on drums, they form an awesome power trio playing an eclectic mix of blues based tunes, composed by Chantel, ranging from traditional blues numbers complimented perfectly by the purity of her singing voice, to a much more raunchy blues rock style.

And boy, can that girl play guitar! With several complicated solos she proved that she can shred with the best of them as her and her guitar became one. I know that there were plenty of people there at the Blues Stage to see Ritchie Kotzen later that day, Chantel included, however I was left completely mesmerised and for me, Chantel was guitarist of the festival.'