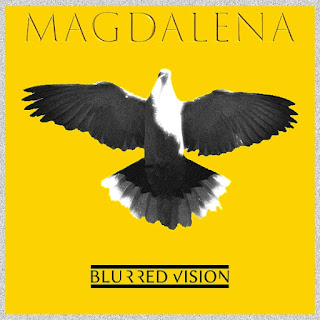 London - Blurred Vision are pleased to announce the digital release of their new single, “Magdalena.” It will be available on all major streaming and download platforms on 10th May and will be accompanied by a lyric video on Youtube.


An official music video will be released on 3rd June to be accompanied by a free show to take place at the Old Queens Head in Angel on Thursday 6th June.

An effervescent, foot-stomping, club rock anthem of a track, “Magdalena” comprises the first offering from the band's forthcoming second album.

Inspired by the call of the collared dove, “Magdalena” is about an eponymous superheroine who breaks the chains of inhibition and mediocrity to free her subjects from the shackles of their mundane world.

Band founder/songwriter Sepp Osley said, “For anyone, if lucky, there is that individual, that free spirit, who comes into your life and completely liberates you from the things that hold you back. Conceptually it really appealed to me as a super power figure. Musically it all started with the call of the collard dove - one of those fortuitous moments where nature gives you that wild ear worm you really want to sing.”

Blurred Vision has been working directly with graduate students from London's MET Film School to create concepts for both the lyric and the official music videos. Students have submitted original material covering all aspects of animation, editing and post production with a view to bringing a young, fresh approach to the interpretation of the song.

This is not the first time that Blurred Vision have been involved with creative video concepts. Their first video to accompany a re-titled remake of Roger Waters' “Another Brick In The Wall” was directed by award-winning director Babak Payami. The song went viral and the video was cited as one of the Top 100 Most Influential Pop Music Videos of All time by Televisor Germany/MTV Europe.

Blurred Vision's “Dear John” video, in celebration of John Lennon, brought together artists and fans from across the world while the stark “Democracy (Beckett cut)” employed a strong monochromatic, confrontational approach which was both moving and compelling.

With the recent announcement of a new live lineup, Blurred Vision are on the verge of releasing their second album. Like their first, it is again produced by Terry Brown.

The new lineup sees the addition of some of London's hottest young musicians. Joining Sepp Osley are Bentley Levy on bass, Jake Bradford Sharp on drums and Jake Libretto on guitars.

Blurred Vision's  “Magdalena” is available for purchase and streaming from the band's official website.