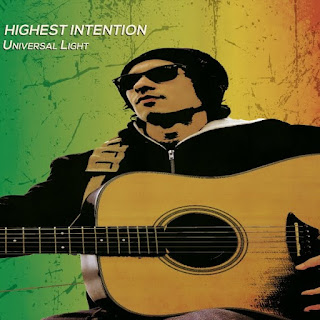 San Francisco, CA – HIGHEST INTENTION is a vintage Roots Reggae Revival band that hails from the San Francisco Bay Area. Their sound is locally grounded and globally appealing, bringing to mind artists like Sublime, 311, and even Bob Marley. Their highly anticipated debut album UNIVERSAL LIGHT will release March 22, 2019 worldwide in stores and online. This stunning debut is a solid release that honors the tradition of Jamaican Roots music while also forging its own brand of progressive Reggae for the new millennium.

UNIVERSAL LIGHT features guest producer Ces-One (J-Boog) and guest musicians Raleigh Neal (Michael Franti), Paul Wolstencroft (Slightly Stoopid), Toho Saunders (President Brown), and many more. Lead singer Karim Israel (Arise Roots) features on the song “Morning Light,” and KBong (Stick Figure) laid down piano on a tune! Describing the first single and title track of the album, Kristy Rose of Top Shelf Reggae says, “Blending traditional reggae sounds with jazzy elements, “Universal Light” is so much more than a song – it's a social statement.” Additional singles “Sky” and “Fat One” will be releasing to radio ahead of the album’s release.

Formed in 2012 by guitar player and singer Ben “Down” Lowe, HIGHEST INTENTION has performed alongside countless Reggae greats and established themselves as a local favorite, conveying a message of love and unity with a clean and fundamentally modern Roots Reggae sound. HIGHEST INTENTION plays to wildly enthusiastic audiences in clubs, concert halls, and festivals up and down the West Coast, including the world-famous Mavericks Challenge surf competition, the Bay Area Vibez Festival, and has performed with artists including Damian Marley, Fishbone, and Native Elements, to name a few.

Ben Lowe says, “The idea behind Highest Intention is to make music that can heal people and make them feel better, and that’s the highest intention for music I can think of. Our music aims to be clean, natural, fluid and graceful.” Highest Intention combines unique and thoughtful songwriting with heavy one drop beats, deep intoxicating bass lines, live horns, and vintage dub style effects featuring sound man Aaron Dahl (M.I.A., Wiz Khalifa), who is arguably the only true apprentice to dub legend Scientist aka Hopeton Brown. The band name “Highest Intention” was conceived by Judah at the Black Spot in Santa Cruz, CA.

Ben Lowe has had many of his own songs broadcast nationally on ABC Television and on shows such as The Real Housewives of Atlanta, and has produced Reggae music for numerous TV networks including Bravo, ABC, and MTV. As a singer and guitar player, he credits the Stepping Razor, Peter Tosh, Culture, and Burning Spear as musical influences, and has backed some of Jamaica’s best-known artists – including Cornell Campbell and Andrew Tosh. Ben Lowe originally founded the hit underground Reggae band Free Energy while attending UC Santa Cruz, and during his tenure with the band he shared the stage with the likes of Steel Pulse, Morgan Heritage, the Marley Brothers, and Culture, to name just a few.

Highest Intention is on the rise with a loyal and steadily-growing fan base, elevating how people feel, spreading positivity, and bringing good vibes with their music. They will be touring their debut full length album in 2019.

“We are extremely proud of the team that came together for Highest Intention. This project has brought new local talent together with internationally touring pros.”