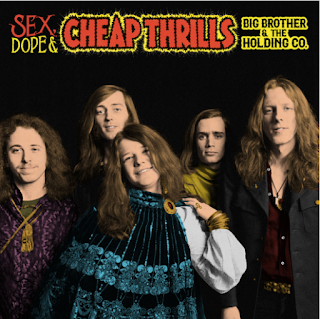 Brother & The Holding Company with iconic lead singer Janis Joplin, had a sophomore album titled Cheap Thrills that would catapult them to stardom and introduced the world to Joplin. Sex, Dope & Cheap Thrills is a risqué title for an album and it was 1968 so as one can imagine, that title was nixed by the label for fear of public retribution which would equal poor sales. This was a typical reaction from label brass at the time. I think the album would have found just as much popularity regardless of any title it had. This double CD set restores the band’s original intent for that blockbuster release.

Within this set, there is an essential new collection of 30 rare performances including 29 studio outtakes and 25 previously unreleased tracks from the mythic 1968 sessions that generated Big Brother & The Holding Company's Cheap Thrills. This also debuts a previously unreleased live performance of a smokin’ hot “Ball and Chain," recorded live at Winterland Ballroom on April 12, 1968.

As far as I am concerned, Janis Joplin was one of the greatest blues singers that ever graced a stage or studio. I think this set will reaffirm that statement and younger fans will come aboard the Big Brother and Holding Company train after hearing this music. Joplin’s emotion-soaked vocals and painful releases of those emotions can be heard in her vocals and the accompanying music. One listen to “Turtle Blues (Take #4)” tells the story of her mastery over the blues.

What I found extremely interesting was reading the CD booklet included with this set. Some history I was unaware of was brought to light. The notes from Dave Getz and Grace Slick were certainly a great addition to this set. The picture of a very young and beautiful Slick and Joplin gets your mind reeling and wondering what was going on in that particular moment in time. If we only could look at a picture of the past and just step in to check it out real time, that would be amazing. Alas, we can dream of moments such as this and realistically get everything we possibly can from the music, words, and pictures provided. 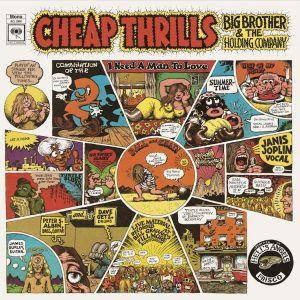 “Oh, Sweet Mary” is an excellent track (7) on the first disc. The band and Joplin are just cranking it out with the pedal to the metal. I really appreciated her vocals when she sang and didn’t scream but I do realize that was part of how she conveyed the raw emotions of the songs to her audience. “Piece of My Heart” (Take 6) is so convincing. It sounds like Joplin is singing right from her toes directly to her heart. She always did sound that way regardless of what song she sang. “Catch Me Daddy (Take 1)” gets off to an interesting start as the sound engineer tells the band “Keep playing if you fuck up, I want to get something down.” Well, it doesn’t get any more realistic than that!

The second disc opens with “Flower in The Sun.” The track has a clean sound and the musicianship is spot on of course. Joplin matches that fine playing with her typically emotive singing style. She was “the” blues mama of her day, there is no doubt about that fact. The track is above average and a different take on their style and output of the day. Being a slight step away from what their audience was accustomed to was likely looked at as taking chance, but now we get to hear the more experimental side of the band. “Oh, Sweet Mary” continues on with that method and it takes on a different style and approach than what you heard on disc one and one that I really appreciated. The extended guitar solo is excellent and it really shows just how tight the rhythm section was. This was one amazing band and this particular track proves just how good they were and could be if given the chance to cut loose free-form style in the studio.

Janis Joplin and Big Brother and The Holding Company were the real deal and it simply does not get any more down and dirtier than some of these cuts. This is the way blues rock was meant to sound like, filled with emotion, blood, sweat, and tears. And that is exactly why Joplin showed up at the right time for the band, she was the final piece of the puzzle that made it all happen. Hearing all this archival material is a great way for any music fan to turn back the hands of time and relive the sessions for the first time.

All tracks previously unreleased except*