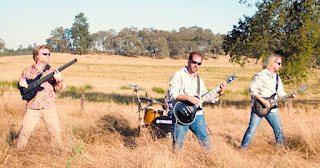 PowerofProg.com Presents The Premiere of 41POINT9's New Video “The Marine”

Your favorite Nerds of Norcal, progressive rock band 41POINT9 have released their newest video for the soon to be released album “Mr. Astute Trousers.” Following closely on the heels of the success of their first two videos this time out the band adopts a heavier sound and more serious topic. The video is for a song called “The Marine” and was based on the true story of a U.S. Marine Corps soldier killed in Afghanistan. When his body was returned to his wife (who was pregnant with their first child) she requested to “sleep one last time by her husband's side” in the funeral home. At her request, the Marine Honor Guard fixed her a makeshift bed beside the coffin and as the last Marine was leaving the chapel, he looked back to see her quietly crying. He turned around and went back to her and asked her if she would like him to stay for a while. She said she would like that. The Marine stepped back up on the dais beside the coffin and stood at attention. When the young mother woke the next morning, that Marine was still there….still standing at attention. Still watching over her, her unborn child and her deceased loved one.