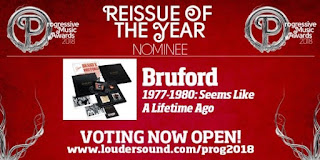 Drum legend and Rock & Roll Hall of Fame inductee Bill Bruford's recently released definitive boxed set “Bruford 1977-1980: Seems Like A Lifetime Ago” has been nominated for “Reissue of the Year” by Progressive Music Awards. Containing the collected works of the band on one extraordinary 6cd/2dvd-a box set, “Seems Like A Lifetime Ago” is a magnificent testament to one of the UK's most inventive and important Progressive Fusion bands.

Voting has begun and will remain open until August 24, 2018. Cast your vote here!
https://www.loudersound.com/features/vote-now-in-the-2018-progressive-music-awards/7