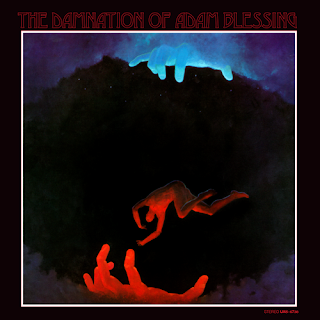 It was 17 years ago when I was introduced to The Damnation of Adam Blessing and their guitar player Jim Quinn. At that time their albums were reissued on the now defunct Akarma Records label. I remember how much I loved their sound. Little did I know that 17 years later I would be listening to the same music remastered from the original source tapes from the UMG vaults. The Akarma releases were recorded from the albums.

I have been staying in touch with Jim over the years. He came knocking on my door again with the good news. He told me these albums now sounded incredible! I am here to tell you he was speaking the truth.

Their self-titled release came out in 1969. If you sat down and listened to this album today you would never know that it was nearly 50 years ago that this music was recorded. Their sound was a blues-based rock with a definitive psychedelic twist.

The first side of the platter kicks off with the amazing “Cookbook.” The lead singer Adam Blessing (AKA William Constable) reminded me very strongly of how Burton Cummings sounded of the Guess Who. His vocals were robust with a resonating range that stays with you. Their version of “Morning Dew” was absolutely killer as well. Working from strength to strength, the band was a tight knit unit firing on all cylinders.

The second side kicks open the door with a rocking cover of The Monkees “Last Train To Clarksville.” I really appreciated it (purists be damned!). This particular track shined the light on their versatility. Speaking of that…the curtain closer “Lonely,” is filled with some very cool jazz riffs from Mr. Quinn. They took a step away from their defined sound and ventured into another realm - and the result was superb!

The Damnation of Adam Blessing was an excellent band recording an incredibly entertaining debut. If they arrived today their retro sound would have been welcomed with open arms. They would be superstars. The problem with showing up in 1969 was the competition. The other bands that were making it big back then are now legendary.

Perhaps now is the time we all took notice of an incredible band that flew underneath the radar on a national scope. This newly remastered version on a fine slice of heavy vinyl will impress, I have no doubts.