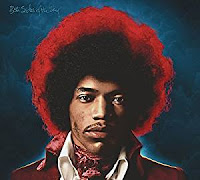 Although the man has been gone since 1970 , the legend of Jimi Hendrix is alive and well and continues to grow exponentially. There was a period of 4 years that this amazing guitar player created some of the most remarkable music. From what I understand, if he wasn’t playing to audiences, he was in the studio with the tapes always rolling. So as one can imagine, he left behind an overabundance of material on the shelf. He made more music in a 4-year period than anyone I am aware of.

This falls right in line with the Hendrix family taking control of his legacy and contributions. When that happened, all of his music was handled properly. Since then, every year we see at least one or two unearthed and remastered albums coming out. It has been a true renaissance for arguably the greatest six-string bender ever. And because of this flow of music over the years, it feels like he never left us. For my musical tastes, that is a beautiful thing. If you like the music of Hendrix I am pretty sure you would agree. I think it goes beyond like at this point for a lot of us.

Both Sides of the Sky is part of trilogy that included Valleys of Neptune (2010) and People, Hell and Angels (2013). So, what is really cool about this release? It is the cast of legendary artists that played with Jimi on these tracks. I had always heard of the different sessions he had at Electric Ladyland Studios (the renowned music church), however I have not heard anything with so many different artists on one recording.  Ten of the tracks are previously unreleased (see all the notations provided on the track list). The sound and engineering on this set is phenomenally crisp and clear. I would expect that goes without saying after all the previous reissued music that set the bar so high.

“$20 Fine” has one of the most recognizable vocalist in rock history, Stephen Stills. “Things I Used to Do” features the master of the white boy blues Johnny Winter. Now that is quite a paring of guitar players. The classic track “Woodstock,” which was originally recorded with Stills on lead vocals (CSN), is in a totally different incarnation with Hendrix laying down the guitar lines. With all the other layers of instruments that were added, it made for a maximum overhaul of the track. I found comfort out right out of the gate knowing Stills is there on vocals, just to remind us who sang it first. With Hendrix’s blues-based rock hammering away, it was a perfect opportunity for the vocalist to step in and complete the changing shades and colors of the track. It worked for me but may not for some purists. It is more meat and potatoes (musically) if you will, and a totally different but interesting take on the song.

“Power of Soul” has always been one of my favorites ever since I heard it back in the 70’s on vinyl courtesy of the Crash Landing album. This extended version is terrific.

There are some real blues barn burners on this set. The playing is pinpoint, biting and memorable. Hendrix had it down, he owned it. Once you hear “Things I Used to Do” and “Georgia Blues” you will find out exactly what I mean. Lonnie Youngblood does a great job belting out those ‘Georgia Blues,” answering Jimi’s sting like a bee leads. The sax that comes in towards the curtain closing on the number is a nice touch as well. That horn just cries and screeches “do you hear me now?” And trust me, there is no filler anywhere on these tracks. If you enjoy a total blues workout then you will love those two rippers.

Any time I cover anything by Hendrix I feel like I could write a book instead of an overview, but I have to reel it in and let the music fans decide if they have the same feelings and or thoughts about this release. Both Sides of the Sky is a fine addition to the archives and one release any rock or blues fan should get ASAP!