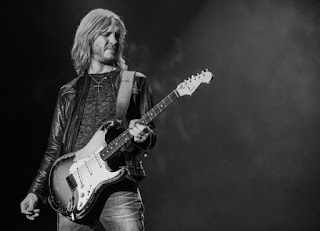 Legendary guitar slinger Kenny Wayne Shepard and his band invaded the cozy confines of The Egg in Albany NY last night.  I had been to the venue one time before and enjoyed the intimacy and atmosphere not mention the unique architecture, outside and inside.

The seating there is terrific, there is not really a bad seat in the house. Although I was positioned in the center I was in the very last row. Even though that may seem too far back I was fine with my seats and could see everything going on without any issue. The sound folks were right behind us and graciously gave me the set list before leaving.

Sly Fox and The Hustlers warmed up the receptive crowd before Kenny arrived. They are local to Albany and have their own album out. We heard some originals and they also did some covers, like most blues bands. I thought they were exceptional. The crowd did as well and gave them a good send off before the lights came back on for a short break.

Kenny Wayne Shepherd is one of those young phenom’s I remember when he first started. Right out the gate his name was stamped into the souls of all blues rock oriented followers. He has done nothing but gain notoriety in the passing years and ultimately the respect of his peers. The admiration from the community you are in is one of stepping stones to being recognized and a path to stardom. It didn’t take Kenny long to get there.

If you are in the mood for a show that has a band onstage that knows how to play traditional blues properly with rock mixed in then you need to get your tickets to see KWS. I mean this band smokes!

I had never been to one of Kenny’s concerts but knew it would be a must for anyone that loves the blues. By the time the evening was through I felt like I just saw the Hendrix incarnate!  He has one of the tightest bands and one that includes another legend in his own right, Chris Layton on drums. He held down the rhythm section for Stevie’s Ray Vaughan’s band and from that point his name was written in stone. 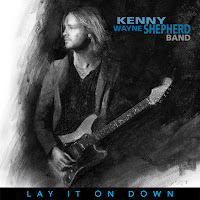 Kenny and his band also have a new album out titled Lay It On Dow. They gave the audience a good taste of that featuring several songs. It certainly made an impression as they were lining up to buy the CD after the show (including me). It is a very rootsy blues rock oriented set of songs and that country influence is heard in some tracks as well. Of course, that is where the roots sound comes in. It’s that blend of blues and country that forms into a superb musical gumbo. Kenny and his band wear it well.


Noah Hunt handles a lot of lead singing and he switches off with Kenny depending on what song they are doing. They both have good voices however Noah’s vocal timbre is deep and just right for this kind of music. Many times, during the evening he reminded me of Paul Rogers however when I listened to the CD on the way home I did hear that, which I found interesting. Therein lies the difference between a live and studio performance. And speaking of that difference, this band is so good that they nail their studio tracks spot on. And to the delight of the audience, plenty of improvisation and wailing away is provided by Mr. Shepherd.

Favorites of the night were “Heat of the Sun,” “Blue on Black” and an amazing rendition of  “Voodoo Child.”

This was a night to remember for me and I am sure for everyone in attendance there. KWS has earned his seat amongst the great guitar heroes of our generation and I would expect to see him continue to gain fans. The man is only 40 so he has at least another 40 years or more left before hanging it up, if he ever does. Most blues players play until the cannot anymore or simply pass away. I know one thing for certain, this six-string bandit will be entertaining audiences long after I leave this planet.

The music of KWS reaches out to everyone and any barriers that were in place outside the venue in daily life melt away instantly. It makes me wonder…if we piped in music on every city street across the world if it would change the attitudes of people and make it a better place? It’s worth a try.