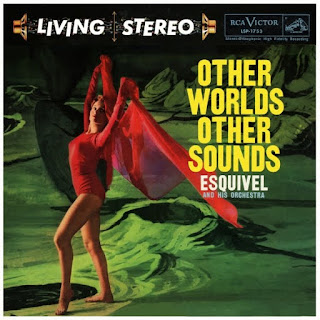 “Esquivel's use of stereo recording is legendary”

Camarillo, CA - Marshall Blonstein's Audio Fidelity is releasing the “King of Space Age Pop” Esquivel's Other Worlds, Other Sounds album on 180g Vinyl LP. Esquivel was a Mexican band leader, pianist, and composer for television and films and widely considered the king of a style of late 1950s-early 1960s quirky instrumental pop known today as lounge music. RCA contracted with Esquivel in late 1957 and brought him to record in Hollywood in early 1958. He was given five hours of studio time to record the album Other Worlds, Other Sounds.

His orchestration tended toward the very lush, employing novel instrumental combinations, such as Chinese bells, mariachi bands, whistling, and numerous percussion instruments, blended with orchestra, mixed chorus, and his own heavily-ornamented piano style. The chorus was often called upon to sing only nonsense syllables, most famously “zu-zu” and “pow!”

The cover of Other Worlds, Other Sounds says it all...like the woman in red dancing on a moonscape, this 1958 LP was all about fantasy. And Esquivel, wasn't afraid to fantasize about his instrumentation nor the new audio sound known as “stereophonic” or “Hi Fi.” At the time Esquivel was using this new tech to its fullest by arranging the music in a unique manner as well as considering right channel-left channel. Voices ring back and forth between speakers, horns explode out of nowhere, and piano sounds cascade out of the stereo. This is what hi-fi was all about. It is seamless, quite enjoyable and rather magical.