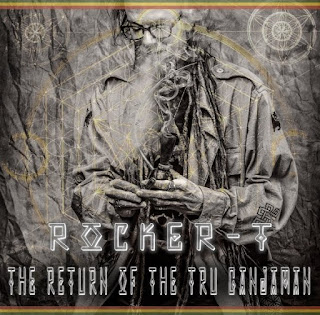 Oakland, CA – Brooklyn-born Reggae pioneer Rocker-T announces the release of his newest album, The Return of the Tru Ganjaman, featuring Reggae Legends Mykal Rose (Black Uhuru), Prezident Brown and UK Reggae Superstar Gappy Ranks. The new album showcases some great original songs, along with some inspired remixes of some older songs from some well-known producers. The 19-track release (16 songs on the CD and 3 bonus tracks on the digital album) is put out through Luvinnit Productions, Rocker-T’s own independent record label, on June 17th, 2016. The album has many other amazing guest features including Mr. Williamz, Skip Wicked (Indubious), Mama-T, Ras Indio, and Jah Wave, and spans many genres while staying rooted in the conscious Dancehall reggae that Rocker-T is known for.

This full-length album comes on the heels of Rocker-T releasing Tru Ganjaman: The Remixes on April 20th, 2016, which has been receiving rave reviews and international airplay since its release. Throughout his 30-year career, Rocker-T has always been on the cutting edge of the worldwide movement to decriminalize cannabis, personified in his groundbreaking, award-winning 1996 anthem Tru Ganjaman. To celebrate the 20th anniversary of the song’s release, Luvinnit Productions commissioned and released Tru Ganjaman: The Remixes, featuring 23 remixes of this iconic track from a variety of well-known producers. The compilation includes Reggae, Hip Hop, Dub and various EDM sub genres including Dubstep and Dance. Amongst the amazing producers featured on the release are the legendary Sidney Mills (longtime producer of KRS1/Boogie Down Productions and Steel Pulse), Neil Perch (of Zion Train), Ras G, Sub Atomic Soundsystem, Roommate, and 6BLOCC.

The song Tru Ganjaman has millions of plays across various YouTube channels and is notably recognized as Rocker-T performs all around the world. His extensive catalog includes the album Give Thanks on Electra Records with his band Skadanks, 7 full-length albums including Nicer By the Hour, If Yu Luv, Show Ya Luv, More Luv, Hold On Strong, Alphabet City, and a two-volume release titled Hurban Warrior Of Peace: Part Roots featuring Gappy Ranks, Rankin’ Joe and Terry Ganzie, and Hurban Warrior Of Peace: Part Konkrete featuring KRS1, Cutty Ranks and Marlon Asher. He has also released dozens of singles and a handful of EPs, including the Luv is the Foundation EP featuring Joan Baez.

The Return of the Tru Ganjaman features collaborations with many well-known and developing artists, and was created at Luvinnit Productions Studios in Oakland, California. The album is mainly produced by Luvinnit Productions, Royal Order Music and Dynasty Records.

Rocker-T has maintained his youthful exuberance, energy, and sound quality both onstage and off throughout his 30-year career with a spiritual and holistic lifestyle, and a grand love of life and music. He has been a huge influence on every music scene he has been involved in, leading the way for such artists as Matisyahu, Alborosie, Josh Heinrichs, Skillinjah and groups like Soja and Fortunate Youth, from a time when American born artists were not performing Hip Hop, Roots or Dancehall in a West Indian Patois. A man whose life seems to have been created for music, Rocker-T is a pulsating force with much energy and love to share with the world.

Rocker-T will perform at festivals and shows throughout 2016 in North America and Europe to promote the album’s release. Check out Rocker-T’s social media sites for updated show information.
For Bookings or more Rocker-T info visit http://rocker-t.com/

To listen to or purchase Tru Ganjaman: The Remixes on iTunes https://itunes.apple.com/us/album/tru-ganjaman-the-remixes/id1102985271

Press inquiries, or to set up an interview, please contact Billy James - Glass Onyon PR at glassonyonpr@gmail.com or 828-350-8158

For Digital Distribution please contact Jerome Forney at IDC at 415-292-7007 or via e-mail at jerome@independentdistro.com