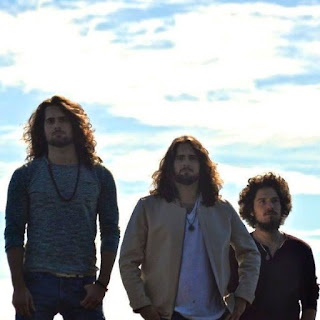 “If this impressive debut can introduce them to the same audience that has embraced The Dirty Loops with such enthusiasm, 'Days in the Sun' might launch SkyTalk to great heights.” - PROG Magazine

NYC - In support of their latest critically acclaimed EP “Days in the Sun” NYC prog trio SkyTalk has released a new video titled “Hearing The Silence”!


SkyTalk is a 3 piece collaborative effort formed in January 2015 by twin brothers Jordan and Talor Steinberg and Dan “Ello” Costello. Costello was introduced to the twins by a mutual friend while all three were attending Purchase College. They bonded instantly on a similar taste in music, particularly 70's progressive rock bands like Yes and Rush. Shortly after meeting, the three met up again to jam and quickly found that they had an undeniable musical chemistry, as well as similar inner philosophies on life and music. Eager to form a band, the three began writing original music together and were surprised at the effortlessness of the process, writing five songs in a matter of two months that would later become their “Days in the Sun” EP.

Blending their love of progressive music as well as soul and funk influences, SkyTalk polished their newfound sound and recorded the EP in the following months. With a lyrical emphasis on spiritual concepts, and the shared belief that music is a necessary and powerful force of healing and expression in the world, SkyTalk has released their first EP and is currently working on a new full length record which even further emphasizes these principles.

Here's what the press have raved about SkyTalk:

“Hearing the Silence is an incredible piece of music. It combines King's X sounds with fusion and more of a soulful rock element. The instrumental section is pretty crazed. I love the funky bass.” - Music Street Journal

“With licks and riffs boiling hot, 'Hearing The Silence' turns out quite dry, its powerful chorus an exemption and its solo section the best showcase of the group's dexterity.” - dmme.net

SkyTalk is currently booking shows in New York and in the East Coast, as well as beginning to record a full length album. They are also working on another music video.

To purchase SkyTalk “Days in the Sun” EP: http://skytalkband.bandcamp.com/releases