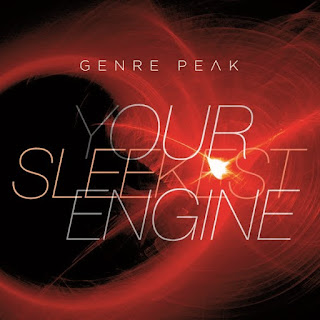 Says Martin, “The idea of 'Your Sleekest Engine' is what I consider things, ideas, concepts that provide the straightest line between point A to B. A syringe, a gun, a synapse, lightning, morphine, a car, plane, I consider these things 'sleek engines'. I want the music to be designed for elegance but still retain a 'pop' sensibility. 'Your Sleekest Engine' is 3 years of hard work, networking and intense collaboration with some of my idols in music, it's a strong and very dynamic album. I'm quite proud of this cause collaboration is best way to work for me.

“After the ambient album '9 Microspheres' I wanted to get back to where I could collaborate with singers and players. I approached Steve Jansen to remix a track off 'Preternatural' I did with the late Mick Karn, Steve agreed but did much more than a remix, he composed a whole new original song which blew me away. I had Lesley Braden of the Seattle band Fast Arrow write sing over it and I think it's dark and glorious much like most the songs I write. I contacted Jon Hassell who has been a huge influence and is the reason I'm an electronic-percussionist, and we came up with the beautiful instrumental 'Metanoia', I then started writing more songs with singer Charlie Woodward who sounds a bit like Jon Anderson of Yes to me (another favorite band) and we just clicked - thanks to Edo Castro (Pat Metheny Band) for introducing us.”

Last summer Martin recorded a track with Palestinian-American multi media artist Manal Deeb for the Arabesque song “Fix Me Deeper”; a track based on his sympathy for the suffering of the Palestinian people who he finds quite beautiful, brave and artistic. Manal did the spoken Arabic words and Martin sang the lead. He also sang the lead on “Denizen Darklight” which is about crime in America.

Rob Ayling of Gonzo Multimedia introduced Martin to Matt Malley of the Counting Crows and he delivered some great bass on “God Fearing Men” and “American Civil Rage”. Award winning poet Michael Spring spoke his poem “First Born of the New Millennium” Martin wrote the music for that one, and Richard Barbieri did an amazing remix of “Fix Me Deeper” both versions were released as a single last Fall and received great reviews.

Says Martin, “I modeled Genre Peak after Alan Wilder's Recoil and Massive Attack as we as well collaborate with many different artists, do instrumentals and Filmscore, I find this the most exciting way to work, it's always different and working with artists you grew up listening to is quite rewarding for me. I like to call Genre Peak's music 'electronica-organica' as I use electronics with a warm live cinematic sound.”

Martin Birke's original compositions began getting nationally published in 1990. His history as a drummer, keyboardist, programmer, songwriter and vocalist is in a current variety of US & European releases. Starting as a drummer in the late 70s, Martin now specializes as an electronic percussionist, composer and performer. While with the Frank Mark Arts label in Germany during the mid-to-late-90s, Martin was recording and touring in the bands Casualty Park, Sandbox Trio and studio project Birke/Leykam/Panasenko.

Martin Birke is well known for scoring original music for The Alvin Ailey American Dance Theatre, recording and touring internationally with Sandbox Trio, Casualty Park, Genre Peak and with Percy Howard (Meridiem,Bill Laswell) in the duo Hardboiled Wonderland. Genre Peak has released 2 full-length albums “Ends of the Earth” (2006 in-code Music) and “Preternatural” (2008 in-code Music). Starting in 2006 as a trio with Martin Birke on vocals and electronics, Daniel Panasenko on Chapman Stick and Stephen Sullivan on guitar-synths and vocals. The trio performed as an electronic rock band around Northern California cities until the departure of Panasenko in late 2006.

Here's what the press have said about Genre Peak!

“Genre Peak realized a quite diversified piece of music, mixing different vocal, ambient and rhythm elements. There also is a real will and attention to distill great sound treatments. This is modern music covering a wide range of influences.” - SIDE-LINE Magazine

“People with eclectic tastes might really like this album. The synthesizers are great and so is the percussion and singers. This is something to listen to if you want to hear something very different than what is on MTV or the radio.” - The Celebrity

Martin recently scored music for the upcoming film “Isabela” by Dell Cullum out this summer/fall as well some music for the TV special “Imagination Nature: Galápagos”. Genre Peak will play live around the west cost over the summer and is headlining at SHINE in Sacramento on March 26th. The new live ensemble features singers Charlie Woodward and Tara C. Taylor, Stephen Sullivan on guitar-synths, Paul Relvas on basses, and Martin on electronic-percussion. The band is performing songs from “Preternatural” and “Your Sleekest Engine” and sound great! It's really hard to do Genre Peak live due to the complexities of the original recordings but this time the band is nailing it!

Lastly, Martin has this to impart to his listeners, “Explore new music, commercial radio plays only 2% of all the music released in any year, I spent my youth studying all kinds of known and unknown bands, authors and artists constantly expanding my range of interest. Learning all I could about different styles of art, music and poetry and film. There's so much new music out there and with the internet it's much easier to find. Also I encourage my listeners to be open minded and know sometimes things that don't immediately appeal just might once you understand it and take time to appreciate it.”