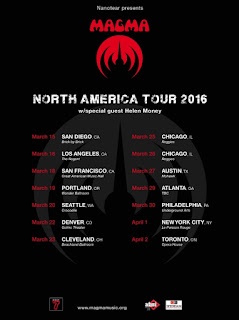 Paris, France - One of music's most innovative and eclectic ensembles Magma will tour North America beginning in March 2016! Swirling riffs in odd time signatures, theatrical choir arrangements, heavy and distorted pulsing bass guitar, bombastic and minimalistic (sometimes both at the same time), dark and brooding, adventurous and angelic, jazzy or classical, but always with the highly innovative and original drums of founder and main composer Christian Vander. On the forthcoming US dates the legendary ensemble will be performing selections of new and classic Magma music!

Clearly Magma is one of the most influential of all French bands. They have left a legacy of music that defies any of the standard and convenient classifications of rock, operating instead in a realm of their own creation. It waits to be discovered by new converts, and continually by older fans alike!