Drum Legend Corky Laing Is Back On The Road! 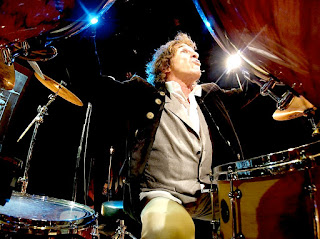 NYC - The legendary drummer, Corky Laing, is back on the road with his first solo project since 1977. “Corky Laing plays Mountain” toured the UK in November 2015. Following an enthusiastic response from the UK audiences, he returns to Europe this spring. First up is a nine-day tour of Germany in February and in May he’ll be back in the UK. Corky is also locking in US dates starting with a package with Kofi Baker’s Cream Experience in Sag Harbor, NY in late February and with further dates for “Corky Laing plays Mountain” being scheduled for late May and early June.

After Mountain stopped touring in 2010, Corky has been busy with his one-man show, “Best Seat in the House” and the critically acclaimed “Playing God: The Rock Opera”. The Rock Opera has been performed in Basel, Switzerland, in Helsinki, Finland and last year it made its American debut with a sold out show at the Kaye Playhouse in the heart of Manhattan. This year the opera returns to Finland where, in addition to shows, it will be filmed for a video release.

Being back on the road with “Corky Laing plays Mountain” is a thrill for Corky. He loves playing the Mountain material the way it was originally written and says that behind the kit, in front of an audience, he feels like he is 18-year-old again. And from what the reviews say, the youthful enthusiasm is thoroughly reflected in the band’s sound and attitude.

For more information about Corky and his past, current and future activities (including updates on live performances), please visit:
http://corkylaingworks.com