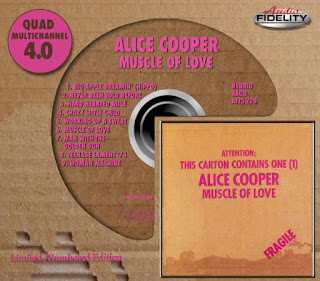 “Alice returns to a pure rock sound...one of his most revered albums ever.”

Alice Cooper fans rejoice! Marshall Blonstein's Audio Fidelity will be releasing the final Alice Cooper group album on 4.0 Quad SACD. Muscle of Love is the seventh studio album by Alice Cooper and it was the last album to feature the entire original band, and it was a true grand finale at that. Cooper stated in an interview at the time that the album marked a return to fundamentals. “It's not complicated in any sense...It's very basic rock &amp; roll throughout.”

The two best-known tracks are undoubtedly the Top 20 anthem “Teenage Lament '74,” which features none other than Liza Minnelli, Ronnie Spector, Labelle and the Pointer Sisters on backing vocals, and the rollicking title track. But other tracks are just as good - the Led Zep-stomping opener, “Big Apple Dreamin' (Hippo),” the gentle “Hard Hearted Alice” (a precursor to Cooper's future ballad-oriented direction), the raging “Working Up a Sweat,” and “Man with the Golden Gun.”

The 1973 return to the band's more hard rock roots was a successful creative choice and catapulted Muscle Of Love into Billboard's Top 10 Album Chart. That sound, complete with the prog-rock/heavy metal workouts, has proven over the years to be a significant piece of the Alice Cooper legacy.

“One of the best albums of the genre...a hard rock classic!”