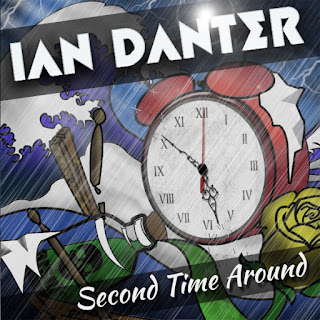 London, UK - Ian Danter is an incredibly talented multi- instrumentalist and songwriter who released his debut album "Prove You Wrong” to great critical acclaim in 2013 – he is also very well known as a sports broadcaster on talkSPORT Radio in the UK. Ian also plays drums with the longest running KISS tribute band Dressed To Kill. His musical influences include Dio, Rush, Foo Fighters, Wildhearts, Cheap Trick, Jellyfish, Pantera, Journey and Aerosmith, to name a few. Now much to the excitement of Ian's fans worldwide, his sophomore album titled “Second Time Around” will be released on Cherry Red Records in September 25, 2015!

“Second Time Around” features 11 brand new songs all written performed and sung by Danter on his own – these were recorded during various sessions in Birmingham in 2014 & 2015 . This album gives Classic Rock a neat, modern twist – great hooks and catchy harmonies allied to strong, punchy performances and thoughtful, witty lyrics throughout covering themes of religion, money, relationships and fame-seeking

Says Ian, “The wonderful thing about this album for me is how truly unexpected it was.

“You see, the huge confidence I gained from my debut album 'Prove You Wrong' suddenly reawakened my songwriting instincts - and here we are 2 years later with all these really really strong new tunes. Not only that, but also this new-found confidence led me to play and sing the whole lot on 'Second Time Around'. I knew I could do everything this time - and I did!

“This, in my opinion, is the album that some of my favourite Classic Rock bands SHOULD be bringing out nowadays rather than the boring, one-paced efforts they're churning out instead. You got riffs, melodies, harmonies and more hooks than a butcher's shop meat rack here! I'm so so proud of it.”

“The eleven songs…are explosive bolts, individual landscapes of colour and they represent a revival of the styles and spirit of classic rock” – Metaltalk.net

Watch Ian Danter's video for the song "We Believed":