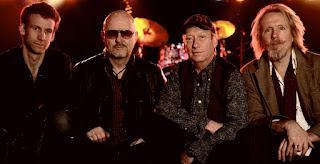 Danbury, CT - Wishbone Ash, one of the most influential guitar bands in the history of rock, returns to these shores in September with the Road Warriors North American Tour. The tour begins in Colorado and moves eastward through the month, passing through 12 states and Ontario, Canada. Longtime fans and new converts alike will revel in the group’s signature twin-guitar mastery and powerhouse rhythm section as they present classics spanning their career and showcase selections from their latest studio release, “Blue Horizon.”

True road warriors, each year Wishbone Ash logs around 30,000 miles, roughly equivalent to circumnavigating the earth; but this year may just set an all-time record with a series of July performances in South Africa. “We are looking forward to reconnecting with fans from the past who are just catching on that we've been touring non-stop for 46 years, to see and hear how we’ve grown while carrying the torch,” says founding member Andy Powell “And for our faithful fans who have walked with us consistently through the years, we have some special things in store to reach new heights in our relationship.”

The Road Warriors North American Tour also comes on the heels of two live recording projects in May, including a direct-to-vinyl performance at renowned Metropolis Studios complex in London slated for a fall release, expected to be available on both vinyl and CD. “Recording live in a studio and going straight to acetate is rarely done,” says Powell. “The conditions have to be just right, because you only get one shot. Everything has to be in sync.”

Immediately following the Metropolis session, the band did a three-day residency at Le Triton Theatre in Les Lilas, Paris that was recorded for a DVD release in October. Powell says, “We recorded three nights of material, including current versions of some classic songs, plus some deep tracks that people won't necessarily expect.”

Formed in 1969, Wishbone Ash is led by Powell on guitar and vocals, trading licks with Finnish guitar master Muddy Manninen. Bassist Bob Skeat, an 18-year veteran of the band, sets the pace with Joe Crabtree, one of the best of Britain’s new breed of drummers whose performance credits include Pendragon and David Cross of King Crimson.

Through the years the band has delved into various musical genres, from folk, blues and jazz to pedal-to-the-metal rock and electronica. Whatever the style, Wishbone Ash’s hallmark is the distinctive twin-melodic lead guitar interplay that has influenced such bands as Thin Lizzy, Lynyrd Skynyrd, Iron Maiden and, more recently, Opeth. Wishbone Ash has to its credit 24 original studio recordings, 11 live albums and five live DVDs along with a DVD rockumentary (“This is Wishbone Ash”).

According to Powell, the album’s diversity reflects the culmination of several factors. “The band basically lives together year-round, so we have a very strong level of communication that translates in our performances and recordings,” he says. “We’ve come to an era where the industry has to pigeonhole a band as Classic Rock, Prog Rock, Heritage Rock and so on. The truth is that we have always kept our options open and always relied on the musicianship of the players to lead the way. It’s fun to be stylistically diverse and this has, in its way, contributed to our longevity.”

Powell has been working on his autobiography, “Eyes Wide Open: True Tales of a Wishbone Ash Warrior,” which is slated for October publication and will be available through Amazon. “It’s quite an undertaking to put 46 years of being a touring musician in this one band into book form,” he says. “I’ve seen a lot of changes in the music business and the world in general, as you can imagine.”

There is no other rock band in history that has done more with the twin guitar concept than The Ash. Be sure to catch them on the Road Warriors Tour this September. Tour dates and more information can be found at www.wishboneash.com.