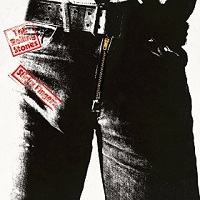 It is hard to think of rock music without The Rolling Stones.  Formed in 1962 and one of the leaders of the British Invasion, they are one of the biggest acts of the last fifty years, and do not appear to be stopping any time soon.  Considered to be one of their best albums, Sticky Fingers is their ninth British and eleventh American studio album and one of their “golden era” albums of the late sixties and early seventies.  Though now a four-piece, The Rolling Stones consisted of Mick Jagger (vocals), Keith Richards (rhythm guitar, backing vocals), Mick Taylor (lead guitar), Bill Wyman (bass), and Charlie Watts (drums) back then.  This two disc deluxe edition is a must have album for rock fans.  With a remaster of the original and another album featuring alternative and live versions, Sticky Fingers does not disappoint.

There might not be a better opener in rock music history than “Brown Sugar.” It is a song that once you hear it you cannot forget it.  The music is fun, playful, and upbeat that takes on a new dimension when the lyrics are considered, dealing with sex, race, slavery, and drugs.  There is a sweet horn section and the guitar riff will be forever recognizable.  Following up “Brown Sugar” is “Sway,” a great, sultry blues rock jam, with a superb outro on guitar.  “Wild Horses” is a low-key country rock ballad and a real emotional piece.   It is the kind of song where you just need to lean back and let the music wash over you and take you in.

With an opening guitar riff that sinks into your bones, “Can’t You Hear Me Knocking” is one beautiful rock song.  The music is lively and thrills like lightning during a summer storm.  It also has a fabulous instrumental part.  It starts around the end of the two-minute mark with Bobby Key’s saxophone solo, before some smooth guitar work takes over.  “You Gotta Move” is a short blues song that is heavy on the slide guitar.  “Bitch” really turns up the heat.  It is one jumping rock tune, with tons of punkish attitude and a great use of horns that gives the song some extra flavor.

Taking things in the other direction, “I Got the Blues” is a toned down, anguished blues rock song.  The low-key music is continued in the somber, acoustic song “Sister Morphine.”  The country rock song “Dead Flowers” has a little more pep in its step than the previous two, though the lyrics carrying some darker undertones. Capping off the album is the wonderful ballad, “Moonlight Mile.” It is a great song that is a dark and emotional journey reflecting on the loneliness of the open road.

The disc features an additional ten songs with five being alternative versions of songs from Sticky Fingers and the other five from a live performance.  The alternative version of “Brown Sugar” features Eric Clapton and there is an acoustic version of “Wild Horses” that is just as good as the original.  The condensed version of “Can’t You Hear Me Knocking” does not have much on the original.  The saxophone is sorely missed.  The extended version of “Bitch” is pretty rocking with instrumental parts.  The live performance songs include the single “Honky Tonk Women,” while the rest come from earlier Stones’ albums, Beggars Banquet (“Stray Cat Blues”) and Let It Bleed (“Live with Me,” “Love in Vain,” and “Midnight Rambler”).  The live versions sound clean and clear, and add a nice value to this deluxe edition.  “Live with Me” is a sweet, rocking song and the blues rock epic “Midnight Rambler.”

The Rolling Stones’ Sticky Fingers is just an exceptional album.  This is a quintessential rock album that is a must have for fans of The Rolling Stones and rock music, in general.  I will go so far as to say that is definitely one of those albums that you should listen to before you die.