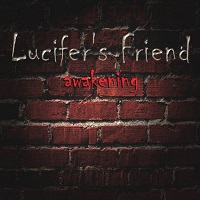 There is nothing like the sound of some good hard rock to start the day.  Founded in 1969 when British singer John Lawton moved to Germany and met the other founding members of Lucifer’s Friend, Peter Hesslein, Dieter Horns, Peter Hecht, and Joachim Reitenbach.  With a career that spanned the seventies and early eighties, this hard rock band was not afraid to experiment with their sound, by incorporating progressive rock, heavy metal, and jazz into their music.  After decades of silence, they have reunited with John Lawton (vocals), Dieter Horns (bass), and Peter Hesslein (guitar) of the original line-up returning, and Jogi Wichmann (keyboards) and Stephan Eggert (drums) round out the band.
Awake

“Ride the Sky” is the perfect song to start this compilation album.  The opening screams act like a call to attention that is completed by the thundering horns, which have me thinking of Led Zeppelin’s “Immigrant Song.”  It is one stellar rock song with weighty guitar parts, powerful vocals, and that booming horn to round out the sound.  With its heavy opening riff, “In the Time of Job” is a lively, spacey hard rock song, with a sound that is both memorable and jarring. The surreal atmosphere created during the instrumental parts is definitely a plus. Changing up the tempo is “Keep Goin’”. The sound is slower and heavier than the previous two songs, with a sweet guitar solo in the middle of the song.

“Toxic Shadows” is a guitar-driven rock extravaganza.  It is a sweet jam that has seventies hard rock written over its long instrumental parts. Next up is the acoustic “Burning Ships”.  Its sound is sweet and sobering and conjures up images of watching a setting sun on the beach, complete with wave sound effects. “Fugitive” is a fun, funky song, with a sound slightly reminiscent of the classic “Shaft” theme song.  The song runs about a minute too long, as the music gets a little weird at the end and sounds out of place.

“Moonshine Raider” has lots of energy and a nice beat.  Its catchy chorus is the song’s strong point, but the music tries to do too much in between and I find myself waiting for the chorus to come back around.

“Dirty Old Town” is a fantastic acoustic song.  The music is pleasant and controlled, as it moves toward a brilliant chorus that makes for a memorable experience.  It rivals “Ride the Sky” for best song on the album.  “Fire and Rain” dazzles with its early eighties rock sound. “Hey Driver” is a solid way to finish the disc.  It is a hard rock song with plenty of energy and attitude that would feel right at home in an eighties action movie.

The second disc features four new songs and they are so-so.  The first one, “Prey,” is one that I like.  The song rocks pretty hard with its pulsating bass line and the vocal performance is very solid, even after all these decades.  “Riding High” is okay, but it could use some tightening up, as it takes too long to get going and too long to end.  The final two songs, “Did You Ever” and “This Road” are fairly average, as well.  It sounds like they are trying to recreate their seventies sound, it is just not the same and ends up being forgettable.

All in all, Lucifer’s Friend’s Awakening is a fine compilation and a solid introduction into their diverse sound that they experimented with throughout the seventies and early eighties.  This is the type of band whose music is just waiting to be rediscovered.  Lucifer’s Friend should definitely be given a look at by any fan of hard rock music, with Awakening being a good place to start.