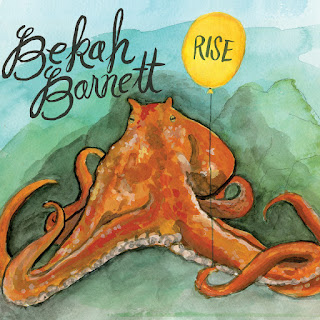 Bekah was raised in Santa Cruz, CA, with the nearby ocean a constant companion and source of inspiration. She moved to Oakland to attend Mills College, and it wasn’t long before she was lured into the Music Department, where she studied classical and operatic voice. In the years since Bekah has been making her presence known. Her song What I Know of the Light is featured in the documentary Corpus Christi: Playing with Redemption by 108 productions. She was honored to sing her disarmingly sweet original love song, Butter Your Toast, at Oakland City Hall to commemorate the first gay marriages in Oakland following the repeal of Prop 8. Her well-received debut album, Find Shelter Here, was released in 2012.

After years of playing and singing regularly in the Bay Area, Bekah auditioned for America’s Got Talent in February of 2014 at the persistent requests of her 92-year-old grandmother. The long audition process consisted of waiting around for over seven hours to play for 90 seconds, and although the experience was ultimately disappointing, she did get a good song out of it. Fame & Fortune is a gem of a track from RISE that stands out with its driving industrial loop and triumphant and honest lyrics. It is a commentary on the reality TV fame machine, and the carelessly regarded dreams of the countless individuals involved.

Bekah Barnett recorded RISE with producer Julie Wolf. A resident producer at Fantasy Studios, Julie was able to tap musicians for the album who have played with some of Bekah’s idols such as Ani DiFranco, Natalie Merchant, The Indigo Girls, and Anais Mitchell. Todd Sickafoose contributed his melodic and captivating bass lines to the project. Allison Miller, three-time Jazz Ambassador of the US State Department, created the original drum arrangements and loops. Hans Teuber composed and played horn arrangements for several of the songs, Michael Papenburg visited the studio for a day to lend his considerable talents layering acoustic and electric guitar on several tracks, and Lyris Hung arranged and played violin on many of the tunes. RISE was engineered and mixed by the adept Adam Muñoz (Snarky Puppy, Herbie Hancock, Dave Matthews, and Bill Frisell).

Recording at Fantasy Studios with these accomplished musicians was beyond Bekah’s wildest dreams, and it was an incredible experience that encouraged her to grow and develop in major ways. It all started with a grant from the Irene B. Wolt Lifetime Trust that a coworker encouraged Bekah to apply for. When she was awarded some seed money, she began to consider the idea of working with a professional producer. It was thanks to the encouragement and connections of her songwriting mentor Rachel Efron that Bekah was introduced to Julie Wolf. Bekah was familiar with Julie from the years she spent touring with Ani DiFranco, whose music was a huge inspiration. “I remember the first time I met with Julie at Fantasy Studios,” says Bekah. “I was so excited and nervous, but she was amazing. Her presence is so warm and she was so enthusiastic about my music, she put me at ease right away. After that I was over the moon.”

Bekah and Julie spent months in pre-production, fine-tuning each song and recording high quality demos to share with the musicians. The album that resulted from all of this amazing collaboration has greatly exceeded expectations and the results show with this finely crafted collection of wonderful songs. Listening to the first completed mix moved Bekah to tears. She says, “Everything sounded so amazing and it was just so overwhelming to hear it all finished, polished, and balanced. We had done all this work for so many months and it was clear that it had paid off. It was beautiful.”

Bekah has always had a deep connection with music. She writes songs like journal entries, natural byproducts of her life that help her to express her emotions in a way that she finds incredible and deeply healing. “I honestly don’t know where I would be without music in my life. I’m addicted,” she says. “Music is such a unique art form because it can connect people of all different backgrounds from all different walks of life and make it so that they are united in the same moment, in the same room, listening to the same song. It can reframe ideas that are often controversial so that a message that might be difficult to convey in a conversation is effectively communicated through a song.”

RISE will be released on August 21st, 2015. Visit Bekah’s Bandcamp page to pre-order the album at http://urbanminstrel.bandcamp.com/