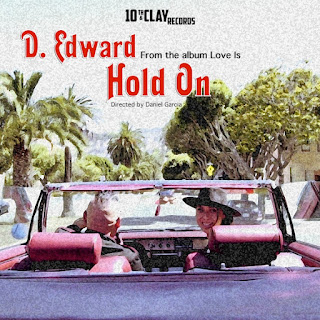 Oakland, CA – Following the release of his critically acclaimed new single “Show Me”, Con Funk Shun percussionist D. Edward is releasing a new single and video titled “Hold On”! The song is taken from his 'Love Is' album which was released worldwide on October 21st, 2014. Two years in the making, the album features catchy hooks and grooves with a familiar, yet unique and modern pop and retro soul sound. D. Edward has the ability to sound different on every song yet maintain his own signature style throughout.

Says D. Edward, “ 'Hold On' is a a retro soul inspired love song with big horns and heartfelt vocals. I originally wrote it as a singer/songwriter, piano and vocal song titled 'Just You and Me' but I wasn't satisfied with the 'hook', so I continued to work on it until I came up with 'Hold On'. At that point, I got the inspiration to rework the song into what it is now. It was the song that set the pace for the overall style of 'Love Is' the album. It’s one of my favorite songs on the album and I’m happy we are releasing it as a single to radio along with an epic video.”

Check out the “Hold On” video and audio here:
Video:

An Oakland California native, D. Edward began his musical journey growing up in an eclectic musical household, influenced by what his parents and older brothers were listening to on the radio and on records. These influences included old school R&B/Funk, Soul, Pop, Hip Hop, Country, Latin and African music, as well as crooners like Frank Sinatra and Dean Martin.

D. Edward’s career thrived in the 90’s San Francisco Acid Jazz scene for many years playing percussion and keyboards, and he co-produced 2 CDs with a group called Know Jazz. During this time D. Edward recorded with celebrity DJs Jay-J and Julius Papp on 'The Shuffle - EP Vol. 1'.

He is an accomplished percussionist and currently tours and records with legendary R&B/Funk group Con Funk Shun. He is also currently working with Grammy winner Laura Sullivan on her new 900 Voices project as well as Latin Grammy and Emmy winners Lucky Diaz and the Family Jam band on their new album "Adelante". He has also worked with Genevieve Goings from Disney’s Choo Choo Soul, Actress/Singer Brely Evans, and Grammy nominated producer PC Muñoz.

His first solo CD 'Little Red Box' gained radio airplay around the USA. His song Truly broke the Top 20 of the FMQB Adult Contemporary Chart and his album topped out at number 21 on the SmoothJazz.com Top 50 Radar Chart.

D. Edward is also on the Board of the Keep Music Rockin' Foundation, which helps to raise funds and offers educational clinics to the music student/programs of the San Leandro Unified School District.

“A small, handful of singers have such distinctive character to their voices, that list would include Darryl Hall, Robbie Robertson, Darius Rucker and perhaps more current, Ray LaMontagne… soulful, rugged and sexy!” - Sandy Shore, CEO SmoothJazz.com

“The vocals are a delight, and when all the pieces come together, as they do on ‘Hold On’ and ‘I Love The Way’, you just have to sit back and admire the handiwork… this is a winner from top to bottom” - Rocker UK Review