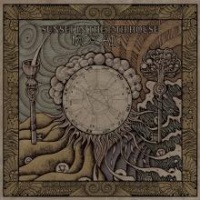 This is definitely one of those bands that would have dipped under the radar of The Ancient One, as I admit a total lack of knowledge about them. The band is Sunset in the 12th House and the release that has landed on the review desk is Mozaic. A little internet research has provided some details of the band and it turns out that the band is the brainchild of Edmond Karban (aka Hupogrammos) and Sol Faur, both members of the folk/black metal band Dordeduh which hails from Romania.

The information about Dordeduh, I will admit, was not filling me with positive thoughts about the album, as I saw the genre described as black metal, but the description of Sunset in the 12th House, was that they were mainly instrumental, meaning that my concern about “growled” vocals waned a little.

Mozaic is a 6 track album with a total playing time of around 56 minutes. The longest track on offer is track 2, “Arctic Cascades” which is 14:43 minutes long and track 1, “Seven Insignia” is the shortest on the album at just under 6 minutes (5:48).

The opening track of the album, Mozaic, is “Seven Insignia” (5:48) and starts with some steady riffing guitar which is joined by drums and bass and drives along until the lead guitar soars with a terrific passage above all else. Just after the 1:20 minute point, the music is added to by growled lyrics which I am afraid do nothing for me apart from make me want to hit the off button. As I am reviewing the CD however, I persevered and actually enjoyed the music minus those vocals. The track is punchy and catchy if you take the vocals away.

“Arctic Cascades” (14:43), the longest track is up next and starts with some gentle electric guitar themes over a simple bass line. This gentleness continues to build very slowly, ebbing and flowing, until just prior to the 3 minute mark. At this point the riffing guitar kicks in with pulsing bass/drums and lifts the track up several notches. The overall impression is of a very atmospheric soundscape, and there are sufficient changes of emphasis to maintain interest.

Next up, “Paraphernalia of Sublimation” (8:25) is another atmospheric slab of audio landscape which merges more traditional instruments throughout most of its length, before slipping into a more heavy metal style with riffing and drumming to take the track out.

“Desert’s Eschaton” (10:56) is another slice of very good atmospheric music which I found very mesmerizing. The penultimate track, “Ethereal Consonance” (9:54) has the gentle guitar, simple insistent bass and clipped drumming merging into a slightly faster tempo as it shifts along. Simple guitar passages help the track flow along. Another winning track for the atmosphere generated throughout.

“Rejuvenation” (6:49), the final track, maintains the gentle start, but slightly faster tempo this time. There are some vocalizations, but thankfully, no growling, and these add to the atmospherics of the track.

Apart from the growling vocals on the opening track, which tried very hard to make me dislike the album, the rest of the album is almost totally instrumental and my overall impression is that this is a very good debut album. Mozaic will not “set the heather alight” (a Scottish comment basically meaning “light up the sky”) but is a generally satisfying atmospheric voyage. If you can get past the vocals on the opening track, there is much to enjoy on Mozaic. Give the album from Sunset in the 12th House a few listens and there will be few disappointed listeners.