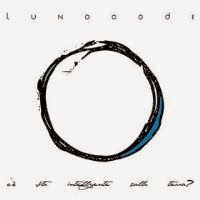 Emerging in 2011, the band has evolved with their unique blend of theatrical narrative, theological rhetoric, melancholy prose and acoustic artistry. Their unique blend of introspection on the human condition goes beyond the typical and delves into the harder questions. Is there intelligent life on earth after all? Beautiful spoken word is interspersed with “Chi vive veramente,” quickly morphs into “Idea #5” with acoustic guitar strumming, percussion and Daphne Romano’s angelic voice. Man’s unstoppable quest for knowledge and greed for more-never ceasing despite indicators that our very nature could indeed be our biggest downfall.

Latin based languages are simply beautiful. The fact that I don’t speak Italian was a hindrance but the lyrical beauty of the narrative interspersed between the songs was a siren’s call to reach out and grasp his words with my ears and strive to hear them despite the barrier of mere language. “Un atomo nell’universo” spins around in a sound that reminded me heavily of Jethro Tull. Flutes and percussive elements swoon along with Daphne’s voice and take you along for the journey. Down and down into the soil of our world. Our humanity. Our foibles and failings-but also our glory.

“Come una scintilla dalla pietra focaia” is nearly a prayer. The whispered reverence with male and female voices reaching up toward the heavens combined with the acoustic guitar was magnificent. The harder questions prevail but the knowledge that humanity is key to the universe never falters, only the call to be more aware of our actions in the tidal pool of life.

Lunocode is a band of artists. Not just musicians, they take philosophical discussion and make it a production of spoken word, resonance, melodic voice and eloquent instrumentation. Language barriers hold no sway as hands reach up to grasp universal truths. With great power comes great responsibility and sometimes humanity loses sight of that fact. But in our foibles and frailty, there is beauty and truth. I highly recommend this unique album.