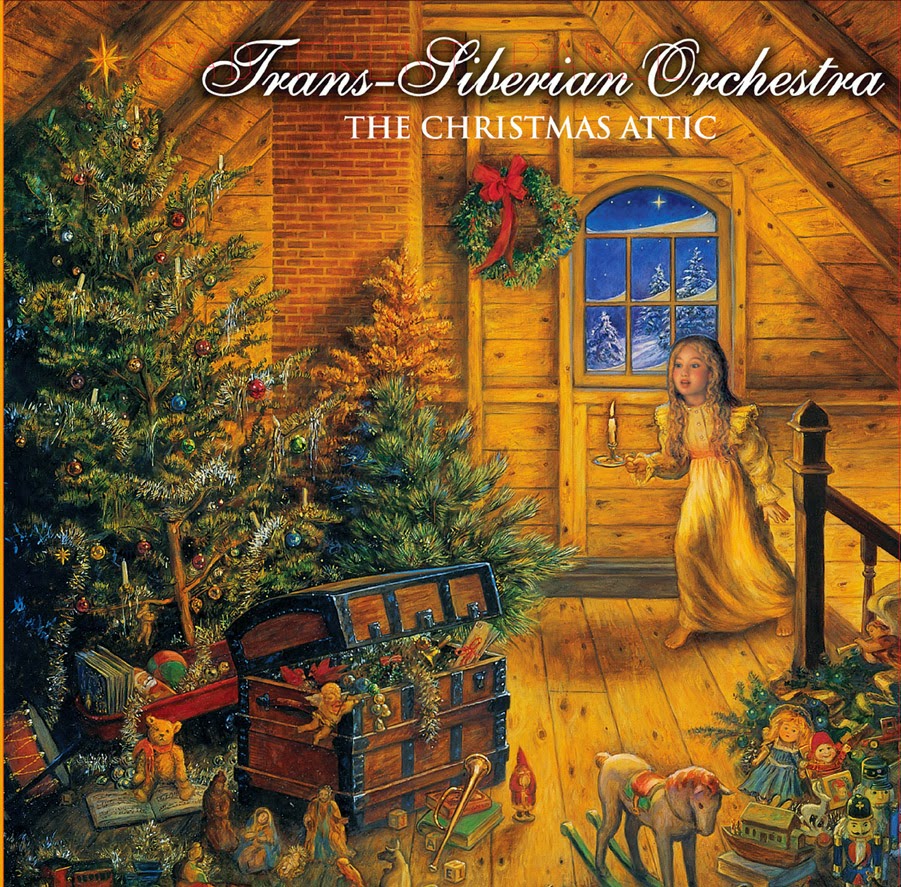 Trans-Siberian Orchestra or what I like to refer to simply as TSO, have been one of my favorite progressive rock bands over the years for their original and engaging stories and amazing live shows. I have had the privilege of seeing them live twice and realized that was the only way to really appreciate this great band. They have accumulated a nice catalog of releases over the years as well.
Their second album The Christmas Attic originally released in 1998 was made available for the first time on this stunning 2 LP 180 gram vinyl set late last year by Audio Fidelity. Last year was also the first time they brought their recording to their lavish stage sets across the globe. I am sure it was a magnificent thing to witness.
For TSO it’s all about the visuals that go with music, or the visuals that dance to the music if you will. After growing up in the age of vinyl and seeing the digital world take over its meaning has become more important to many people including an entirely new generation ready to embrace the format. It’s is a nice thing to see happening. This is a gorgeous set with 2 sturdy 180 gram vinyl LPs remastered beautifully with a stunning and colorful 12 page booklet with all the lyrics and artwork housed in gatefold sleeves. Rock, progressive, and classical all intersect with a powerful punch throughout this release.
I think this band has reached its goal of providing a rock opera with progressive music many times over. By the time The Christmas Attic (the second of a trilogy) was released they had a successful formula that has grown and developed over the years into something far beyond what they could have imagined or hoped for.
Wherever you may reside on this planet you cannot help but feel the joy and wonderment of the Holiday season when you listen to music like this. If you are a fan of concept albums and interesting rock music you will simply love TSO and what they have to offer.
Packages like this are a treasure to behold in this day and age of multimedia and digitized delivery systems. You can hold it in your hand, admire it, and listen to the clean and warm purity of music set to a vinyl disc. I suppose it does help to be a fan of their music but you cannot deny the essence and meaning when it is presented this way. Audio Fidelity knows how to get it all right and they appreciate the best ways in which to release a classic album. Each and every track is important and they all fit together like a musical storybook should.
The Christmas Attic will hold you spellbound with its ebbing and flowing tides of energy, across the board you get all the atmospheres that could possibly be associated with such a story. Don’t miss out on this special numbered and limited edition release!
5/5 Stars
Key Tracks: ALL

SIDE TWO:
1. The March Of The Kings/Hark The Herald Angel
2. The Three Kings And I (What Really Happened)
3. Christmas Canon
4. Joy/Angels We Have Heard On High

SIDE ONE:
1. Find Our Way Home
2. Appalachian Snowfall
3. The Music Box
4. The Snow Came Down

SIDE TWO:
1. Christmas In The Air
2. Dream Child (A Christmas Dream)
3. An Angel's Share