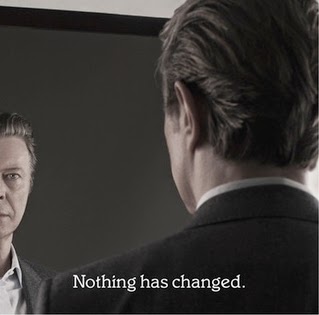 I love the title of this album. It is a statement that would likely come from a legendary music figure like David Bowie. The cover of Nothing Has Changed (3 CD Deluxe Set) shows Bowie today and the reflection of his image does show a man that has changed and aged over the years. If you open up the tri-fold case you see pictures of him at various stages of his career. But other than that what has changed? He is asking the question and it’s definitely something to ponder and see how it applies to the world around you and your personal life. Nothing has changed and then again a lot has, it is contradictory and fact all at the same time. Then again, this is David Bowie and he always leaves the door open for you to figure out what it means.
Bowie says things for a reason and makes music to reflect a consciousness, emotions, and life itself. He has had a storied career and within these 3 CDs you get a glimpse at 50+ years of music and all the transformations he has made during that time. As far as I can remember Bowie has never made music that did not matter. He spawned a culture and took it to another level; he pushed the limits of creativity without setting boundaries and was successful doing it. He is a champion for all walks of life on a worldwide basis and continues to make relevant creative statements to this day. Who else that is in the public eye could go into retirement then record and album without it being leaked? Bowie did it last year with The Next Day.
There have been a lot of greatest hits and compilations released over the years covering Bowie’s career however I would have to say this is the best one yet. Of course the package could always be better, like including a DVD of some of the videos he made for tracks over the years. What I found interesting was the running order of the set. Usually with this kind of release you start at the beginning and work your way to the present, this is just the opposite. In fact the entire proceedings kick off with a new track from the Thin White Duke titled “Sue.” The song sounds nothing like Bowie musically. It is a rock-jazz-fusion mix that comes as a big surprise. But this is Bowie and when has he not surprised us over the years? He single-handedly created genres over a long stretch of time by taking risks and experimenting. How many artists can claim they did that?

I love the tracks assembled in this package but first let me say my three top albums from the Bowie catalog are Station to Station, Ziggy Stardust and Low. When I first heard Low I thought it was very strange and did not particularly like it. As the years passed it has grown on me and now I play it quite often. This is not unusual at all for a longtime music fan or Bowie fan, generally speaking. Bowie was so different for every album he released you had to brace yourself for change and sometimes it took repeated listens for an album to really sink in. It never takes too long to realize his brilliance.

I think it’s only fair to pick a key track from each disc. “I'm Afraid Of Americans (V1) (clean edit)” for disc one, “Absolute Beginners (single version)” disc two and then “Rebel Rebel” for disc three. This is a very difficult choice for anyone that enjoys the Bowie catalog indeed but please keep in mind this is my personal preference.

Invariably there will be listeners wondering where certain tracks are and that is par for the course but in the end this is an excellent collection of tracks so enjoy it all in one glorious sitting. Interesting enough even those who have not been fans of Bowie’s music may perk their ears up and begin to listen. My son did just that, he asked what was playing and genuinely liked what he heard. So there is always room for new fans to come aboard and be part of the Bowie nation. Fans that go back to the 60s or 70s may also realize some things they missed along the way giving this set a spin. It all serves all lot of different purpose but mainly it celebrates one of the greatest entertainers of the past 50 plus years.