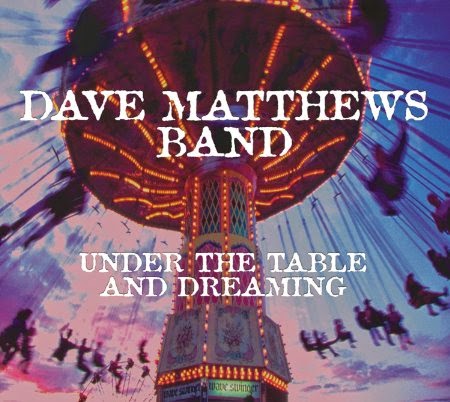 It’s been an exciting year for Dave Matthews Band fans. There have been 4 Live Trax albums, a reissue of Remember Two Things on both CD and 180-gram vinyl, and a reissue of DMB’s major label debut, Under the Table and Dreaming on CD and vinyl as well. Although there has been quite an uproar as to when the vinyl will be arriving on people’s doorsteps (as of now, the DMB store says December 16th), the CD has arrived and listeners have had plenty of time to dig in.

One thing that continuously amazes me when I listen to the Dave Matthews Band is how they have crafted their own unique sound right from the beginning. This album doesn’t sound old or dated, simply because there is nothing else quite like it and there is not much else to compare it to. The album has a theme that shifts back and forth between the typical carefree style of DMB (“The Best of What’s Around”, “Jimi Thing”) and the tense (“Typical Situation”, “Rhyme and Reason”). The lyrical content seems to sway between the serious, the reflective and the borderline foolishness, which gives enough variety to keep things interesting.

One thing that really draws me into reissues is bonus tracks. Reissues are a great opportunity to hear some unreleased content from the old days, but this the album doesn’t deliver on this opportunity as much as I would have expected it to. Yes, “Granny” is one of my favorite DMB tracks and I’m glad to finally have a studio version of it. However, the other two acoustic tracks are slightly underwhelming. I do love the intimate feel of the acoustic renditions of “The Song That Jane Likes” and “Dancing Nancies,” but I can’t help but feel like I have heard these versions in some shape or form. It probably would have been much more enticing to include other studio outtakes, like “Get in Line” or “Kind Intentions (#32).” Of course, I can find them on YouTube, but I would much rather have them on CD or vinyl.

There isn’t a huge difference between this remastered mix and the original. When listening to them side by side, nothing really pops up as noticeably different. The guitars may sound a little “wider’” for lack of a better term, or my ears are just playing tricks on me. The point is the new mix isn’t a good selling point. Another thing I would like to mention is I, along with the rest of the DMB fanbase, can’t seem to understand why they would use an alternate version of “Jimi Thing,” which omits the outro solo by the phenomenal LeRoi Moore. It sounds downright empty to anyone who has heard the original, not to mention it is insulting to the late saxophone player, being such a huge part of the signature DMB sound.

If you haven’t already heard UTTAD, there is no better opportunity than now. Newer fans have a chance to hear the album with a few extra cuts that are by no means bad. However, for diehard fans hoping for something new, this reissue is a bit disappointing. Aside from “Granny,” there is nothing to really make this worth another purchase for those who own the original. For a 20thanniversary release, this landmark album deserves far better.