Concert Review: The Outlaws and Blackhawk 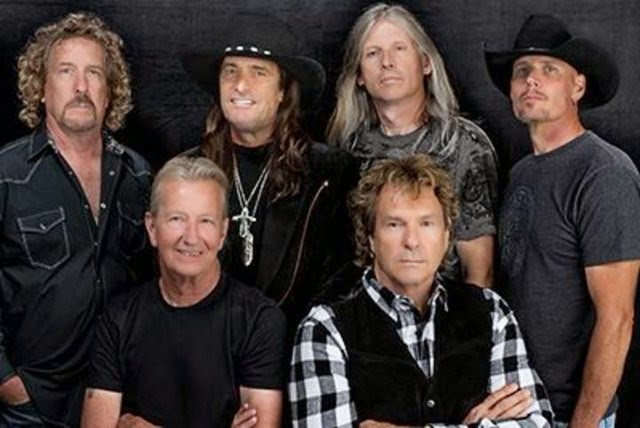 http://www.outlawsmusic.com/
http://www.blackhawklive.com/
It didn’t feel like the winter in Pittsfield Massachusetts last night with country rockers Blackhawk and the Outlaws warming up the Colonial Theater. My word they were good! Let me rephrase that, great!
I was not familiar with Blackhawk but understood going in it was the same band playing different songs from each band’s catalog.

The Outlaws is a band with a storied past and Blackhawk has some history behind them now with 9 albums out. I picked up a copy of their Greatest Hits & More autographed CD at the show because I was just so impressed with their set and engaging country rock sounds. The only two original members in the Outlaws are Henry Paul (guitar and lead vocals) and Monte Yoho (drums) however the present lineup plays each group’s music with a sense of pride and professionalism that was greatly appreciated by this listener.

I saw the Outlaws in Tangelwood in their heyday back in the 70s and distinctly remember seeing two drummers and three or four guitar players creating a wall of sound that was incredible. New flash; they still have what it takes to deliver all of that great music live!

Blackhawk kicked things off. As I looked around I saw some empty seats, something I not used to seeing at The Colonial. I supposed it’s the time of year, the cold weather and people putting their hard earned cash into Xmas gifts. Tickets to this show would have been appreciated as an early gift by any music lover believe me!
I was quite impressed with the Blackhawk sound, which is very much country with flourishes of rock interspersed. I have never been a big country fan to be honest but I was last night. This is a band with a ton of talent at every position in the band.

The jams with all the guitars and each member with the ability to sing make them very strong presenting every song in their repertoire. “Goodbye” started things off for Blackhawk and most memorable were “Rain” and “Just About Right,” which featured some extended jams that were absolutely jaw dropping. Some of the words to “Rain” I believe were very thought provoking like “I can’t see a single storm cloud in the sky but I can sure smell the rain.” The human condition is the main topic of their songs so everything hits home just right.

After a 15 minute break the Outlaws came out opening with “Love Song.” This is one of their more famous tracks amongst many. I was especially impressed with their latest material from their studio recording It’s All About Pride. They treated the audience to the title track and “Born To Be Bad,” which was a killer rocker that brought the house down. I cannot tell you how many times people got to their feet to acknowledge this great band with standing ovations. This response was well deserved to be sure.

I was little surprised to hear their most famous song, “Green Grass and High Tides Forever” to close out the set. I was thinking what they will do for an encore now, if there is one. Well they gave us their encore with an old favorite “Ghost Riders.”

What I got out of this night besides incredibly entertaining music was that this band of brothers have their heart and soul into their music and give the audience everything they have every night. I really appreciated the heartfelt message coming from Henry Paul regarding members that have passed over the years and how they intend on carrying on the history of the band’s music for quite some time

If you ever have a chance to catch them do so, they will give you a performance that will be lodged in your memory for the rest of your days.

Rock on gents! You closed out my concert coverage for the year with some fireworks and pure joy, thank you!
Keith “MuzikMan” Hannaleck-Write A  Music Reviews, Prog Rock Music Talk, New Age Music Reviews & Rate The Tracks Founder
Blackhawk Set:
Goodbye
Yesterday
Every Once In A While
Love Like This
Almost A Memory
Strong Enough
Down From The Mountain
Ships of Heaven
Rain
Just About Right
Big Guitar
Outlaws Set:
Love Song
Hurry Sundown
It’s All About Pride
Freeborn Man
Born To Be Bad
Song In The Breeze
Grey Ghost
Trail of Tears
Waterhole
Knoxville Girl
Green Grass
Encore:
Ghost Riders
Posted by Keith "MuzikMan" Hannaleck at 12/08/2014