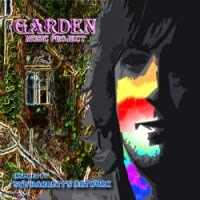 This is another of those artists/albums that I would probably not have come across by chance, but getting Garden Music Project with the album Inspired By Syd Barrett’s Artwork to review gives me the opportunity to broaden my horizons yet again.

This release by Garden Music Project also coincides with the eighth anniversary of the Pink Floyd founder members passing. The creator of the project is Adriana Rubio, who has a rare neurological phenomenon called synaesthesia. This is a condition whereby one sense can trigger one or more other sensory responses.  As an example, a synaesthete might hear sounds in response to a smell or see a certain number as a color. The album, Inspired By Syd Barrett’s Artwork, is probably best described as an “epic interpretation of Syd Barrett’s paintings, using synesthesia perceptions.

The music for Inspired By Syd Barrett’s Artwork, was written by Adriana Rubio and Alexander Ditzend. The Garden Music Project is a 4 piece band comprising, Alexander Ditzend (guitars, lead vocals), Stefan Ditzend (bass, saxophone), Nicolas Saganias (drums, percussion) and Fabrizio Gamba (keyboards, synths).
Inspired By Syd Barrett’s Artwork is a 12 track album with a total playing time of around 48 minutes, with the opening track, “Garden,” being the shortest at 2:46 minutes and “Coliseum,” the longest track on offer at 6:14 minutes.

The opening track to the album, “Garden” (2:46) certainly recalls very early Pink Floyd, with that laid back feel, bass melody, jaunty keyboards and then morphing into a psychedelic soundscape. Chunky keyboards, guitars, and a staccato vocal heralds the entrance into track 2, “Squares, Lines and Polygons” (3:00), which then switches into a melodic passage, returns to the intro theme and then into a jazzy section. The amazing guitar work in the last minute certainly ensures that the track is memorable.

“Isolation” (3:40) is another piece of music seemingly steeped in 60’s/70’s psychedelia, but the following track, “Transformation” (5:47) is well named, as it moves into another style. Introduced by a drumbeat and keyboard, prior to a spoken vocal, this track tries to “paint the scene” before there is another example of some stunning guitar work. At times, this track is almost discordant, but it just about works, as does the meandering saxophone around the 4 minute mark. This is an interesting track, almost jam-like at times but possibly outstays its welcome slightly in its almost 6 minute length.

“Bullying” (3:23) has train noises as an introduction which then builds into another “retro” psychedelia track before leaving the stage to “My Ladies” (3:41). This has terrific strummed guitar and a vocal provided in a sort of disconnected, deadpan manner. The electric guitar starts to soar away behind the vocals and there are classic little hooks here and there.

Classic keyboards and a retro sound announce “Leaving Home” (3:28) and the tempo is noticeably slower. More simple, but effective, guitar builds up during this track. More natural sounds, including thunder, rain and a ringing phone disguise the sudden dive into “heavy” psychedelia that is track 8, “Crime Scene” (3:36). There is a very atmospheric sound to this track, recalling the older police dramas from the USA.

The longest track on offer, “Coliseum” (6:14) has an eastern style at the outset with percussion and synths which slowly merge into a majestic passage, evoking thoughts of the “Christians versus the Lions” soundscape before there is a sudden sideways shift with the saxophone then recalling the Clint Eastwood western trilogy, a la “The Good, The Bad and The Ugly.” The track then reverts back to the eastern style starting point with a spoken voice in the background.

“Tour Bus” (4:25) is another slow builder of a track, sweeping from light to intense in a heartbeat. There are some amazing keyboards over a simple drumbeat around the 2:30 minute point. By the time this listener has reached this point, the same feeling that was apparent on the first listen has reappeared. The style has started to sound repetitive and the feeling of “newness” has gone.

The final track, “Self Portrait” (4:48) features more natural sounds and employs the same style of staccato lyrics. Spoken lines then give way to a very mellow saxophone passage which paints an interesting soundscape with the help of some excellently played guitar.

Having listened to Inspired by Syd Barrett’s Artwork several times, I find myself on the horns of a dilemma. Some of the music sounds as if it could have come from early Pink Floyd albums, but it doesn’t seem to be able to maintain that scenario. Some tracks try hard to succeed, but they don’t seem to quite get there. There are some stunning tracks on this album, but I found the second half of the album seemed unable to maintain the momentum of the first part. The lyrics are certainly interesting as they do reference this unusual complex linking of senses.

Inspired By Syd Barrett’s Artwork I found a bit of a mixed bag of tracks, but as usual, I urge people to listen to the album a few times. This is my opinion and I am aware many people will have a very different view of the album.